Imprisoned Lula is still 'our candidate,' his party says 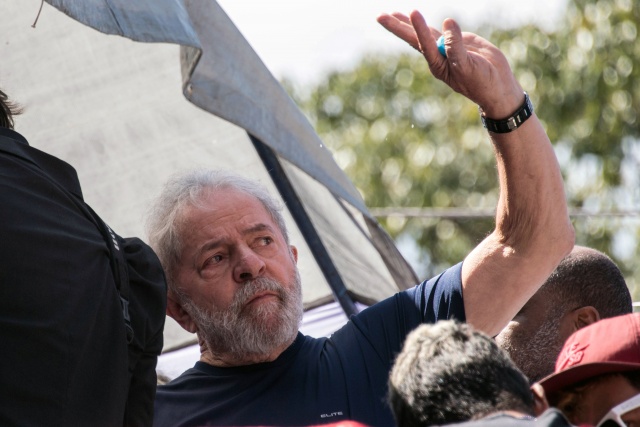 Brazilian ex-president (2003-2011) Luiz Inacio Lula da Silva waves to supporters after attending a Catholic Mass in memory of his late wife Marisa Leticia, at the metalworkers' union building in Sao Bernardo do Campo, in metropolitan Sao Paulo, Brazil, on April 7, 2018. Brazil's election frontrunner and controversial leftist icon said Saturday that he will comply with an arrest warrant to start a 12-year sentence for corruption. "I will comply with their warrant," he told a crowd of supporters. (NELSON ALMEIDA / AFP)

"He is our candidate no matter the circumstances," party chief Gleisi Hoffmann said outside the police station in the southern city of Curitiba where Lula is locked up.

The leftwing ex-president, 72, handed himself into police on Saturday, a day after defying a court-ordered deadline to surrender to start serving his 12-year sentence.

He remains the comfortable favorite in voter surveys heading toward the October election, though his incarceration casts doubts on whether he can legally run for office.

He should be declared ineligible in August after having his conviction upheld once by an appeals court.

But he and his party are gambling that he could be released from prison before then and go on to contest the election.

Many in Brazil revere the former trade union leader for lifting tens of millions out of poverty during his 2003-2010 time in office. But many others believe him emblematic of the graft that plagues Brazilian politics.

He was found guilty last year of accepting a luxury seaside apartment from a construction group that picked up government public works contracts.

His lawyer, Cristiano Zanin, told reporters upon visiting him Monday that Lula "is doing well, reading a lot and he is also happy for the win yesterday by the Corinthians" -- Lula's favorite soccer club.

The ex-leader has a relatively comfortable cell to himself that includes its own bathroom and a television.

"Lula sees himself as a political prisoner. But he has confidence that the courts will soon overturn not only his prison order but also the conviction that was put on him in an unjust and illegal way," Zanin said.

Brazil's Supreme Court is currently considering the laws that have put Lula behind bars while his lawyers are still pursuing appeals.

A vote by the court's justices could take place on Wednesday. If it goes ahead, Lula could be released -- for now -- or remain in his cell. Or, for procedural reasons that often muddy Brazilian judicial deliberations, it may not even get as far as a vote.