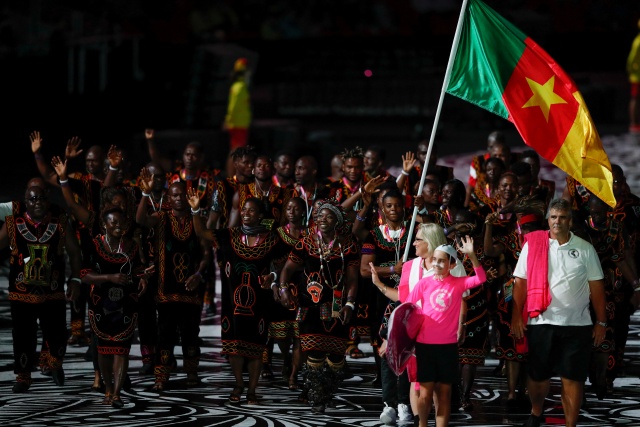 Cameroon's flagbearer Essiane Clotilde leads the delegation during the opening ceremony of the 2018 Gold Coast Commonwealth Games at the Carrara Stadium on the Gold Coast on April 4, 2018. (Adrian DENNIS / AFP)

Three weightlifters and two boxers have not been seen since Tuesday, triggering suspicion they had fled with no intention of returning home. The matter has been reported to Australian police.

"It came as a complete surprise," he said. "We have no idea where they are. There were no worries this kind of thing might happen.

"Their team-mates informed us they had left," he added. "We are cooperating with the police. We are praying this doesn't happen again and doing everything we can to make sure it doesn't."

Commonwealth Games organisers called for competitors to respect the law, mindful of the fact that more than 100 athletes overstayed their visas at the 2000 Sydney Olympics.

"That includes Cameroon and any other athletes. And if they are thinking of doing anything other, I would encourage them not to."

Before the Games opened on April 4, Australia's Home Affairs Minister Peter Dutton warned that athletes would be closely monitored to ensure they did not overstay their visas and that they returned home after competition ended.

Cameroon, in central Africa, is suffering from civil unrest after a military crackdown on English-speaking separatists.