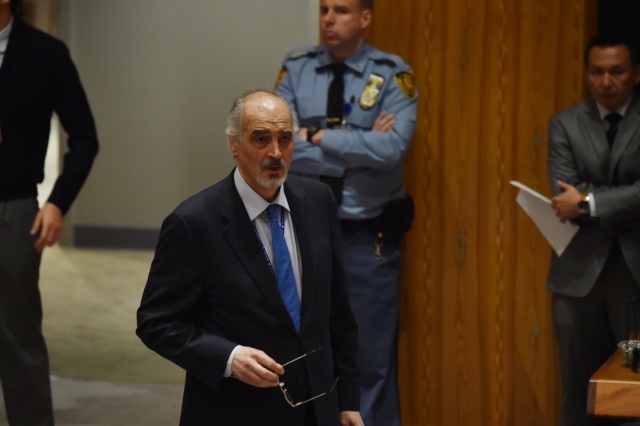 Permanent Representative of the Syrian Arab Republic to the United Nations, Bashar Jaafari (R) attends a UN Security Council meeting, at United Nations Headquarters in New York, on April 10, 2018. Russia on Tuesday vetoed a US-drafted United Nations Security Council resolution that would have set up an investigation into chemical weapons use in Syria following the alleged toxic gas attack in Douma. It was the 12th time that Russia has used its veto power at the council to block action targeting its Syrian ally. (HECTOR RETAMAL / AFP)

(AFP) - In laying his integrity on the line over Syria's suspected use of chemical weapons, French President Emmanuel Macron might be playing for even higher stakes -- maintaining the landmark Iran nuclear accord, analysts say.

The 40-year-old leader, weighing the first foreign military operation on his own initiative, has made clear he considers Damascus behind a suspected chemical attack in the rebel-held Syrian town of Douma last weekend that killed at least 40 people.

Macron's response is expected to be high on the agenda during a TV interview Thursday afternoon, only his third since the centrist swept to power last year.

For many experts, he has no choice but to enforce his "red line" on the use of chemical weapons by the Syrian regime, which would prompt French military strikes.

"Unlike previous incidents, alleged or real, in recent months, what happened Saturday in Douma is a huge and evident violation of Western red lines," said Bruno Tertrais, a political scientist at the Foundation for Strategic Research (FRS).

"If France doesn't react now that the conditions are met, we would lose all credibility," he said.

It worries that allowing such attacks by Syria's President Bashar al-Assad could set a dangerous precedent for other repressive regimes.

Many French officials still bristle over former US president Barack Obama's last-minute pullback on Syria strikes after a chemical attack in 2013.

The decision shocked the French, whose planes were poised for launch to participate in the operation.

"Emmanuel Macron has tied his hands," said Francois Heisbourg of the International Institute for Strategic Studies in London.

"He's in the same position as Obama in 2013, and if he decides not to follow through, there will be a political price to pay."

Macron has spoken at length with US President Donald Trump about how to react to the Douma attack.

Both men have played up their sound relations since Macron invited the American leader to attend France's Bastille Day festivities last July.

Macron has also taken advantage of weakened leadership in Britain and Germany to carve out a role as Trump's privileged partner in Europe.

But he has been unable to sway the US leader on two crucial issues -- the US decision to exit the 2015 Paris agreement on curbing global warming, and Trump's threat to scupper the deal with Iran to curb its nuclear weapons programme.

Several analysts say ending the deal with Tehran and re-imposing American sanctions could inflame tensions across the Middle East, after years of tensions amid the fight against the Islamic State group.

As Macron prepares for a state visit to Washington later this month, "French military action could earn him some much-needed favour," Benjamin Haddad, a researcher at the Hudson Institute, wrote in Foreign Policy magazine this week.

Decisive joint action could give him leverage in arguing to uphold the deal, which comes up next for Trump's review on May 12.

"At the betting table of international relations, the chances are still 20 to one" against saving the deal, Heisbourg said.

Against such odds, "a show of France-US unity on Syria surely can't do any harm" during Macron's Washington visit, he said.