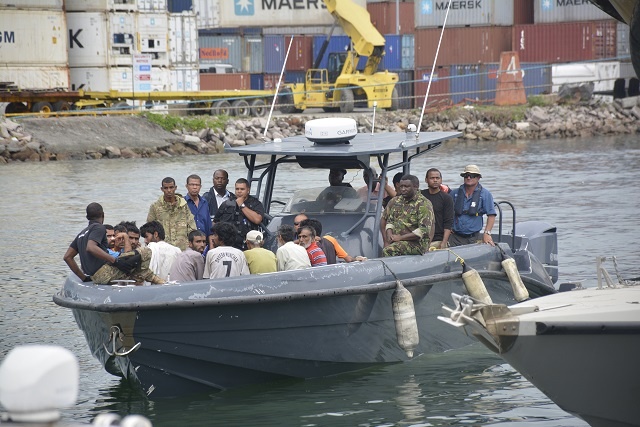 All crew members were rescued by the Seychelles Coast Guard patrol ship – Topaz -- and there were no casualties involved. (Jude Morel)

(Seychelles News Agency) - The local authorities have started an investigation following an incident where an Iranian dhow carrying 14 crew members caught fire and sank in the Seychelles’ waters.

According to a communique from the Seychelles Police, the incident happened in the early hours on Tuesday.

“The incident occurred a few hours after the dhow, suspected to be involved in drug smuggling activities in our waters, was being escorted to Mahe after being boarded by local agents,” said the communique.

The communique said the seizure came during a joint special operation by narcotics agents from the Seychelles Police and Seychelles Coast Guard.

All crew members were rescued by the Seychelles Coast Guard patrol ship – Topaz -- and there “were no casualties involved.”

SNA contacted the Anti-Narcotics Bureau (ANB) of the Seychelles Police for more information but did not receive additional information on the incident.

In the meantime, the Iranian crew members are being kept at the ex-Seychelles Coast Guard base at Bois de Rose on the outskirts of Victoria, the capital city.

In January this year, the Supreme Court of Seychelles sentenced two Iranian nationals to life in prison for the importation of heroin and opium. The two convicts – Emam Bakhsh Tarani and Hattam Mothashimina — were both found guilty of four offences under the Misuse of Drugs Act.

The two convicts along with nine other Iranian nationals were arrested on board a dhow in April 2016 in a joint operation by the Seychelles Coast Guard and the Anti-Narcotics Bureau.

The eleven Iranians were charged by the Seychelles judicial system with various offences related to controlled drugs, but due to insufficient evidence, charges were dropped against eight of them.

At the time of their arrest, in 2016 - the anti-narcotics agency of Seychelles, an archipelago in the western Indian Ocean, had said it is not known where the vessel was coming from. It is believed that the drugs originated from the Makran Coast, between Iran and Pakistan, a route used to transport narcotics destined for the East African coast, and was destined for Tanzania.