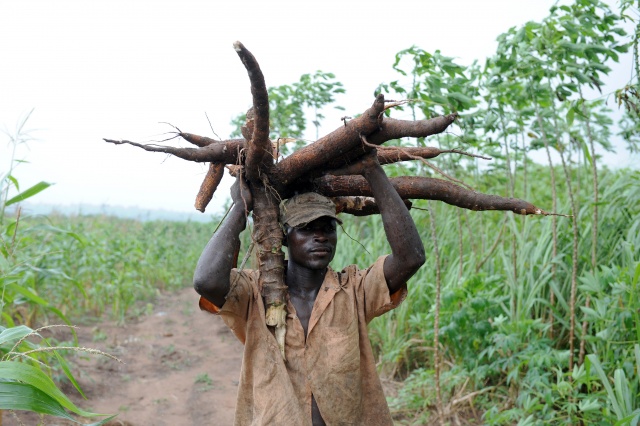 A farmer carries a bunch of cassava roots in Oshogbo, Osun State on August 26, 2010. The International Institute of Tropical Agriculture (IITA) is helping to encourage, promote, and expand agribusiness development in the cassava subsector in Nigeria to expose the virtues of a new strain of cassava: it yields 30% more than usual and resistant to disease. (AFP PHOTO/PIUS UTOMI EKPEI)

(AFP) - A new disease infecting cassava -- dubbed "Ebola for plants" -- could spell a looming food crisis for Africa, researchers have warned, fearful that the emerging blight could decimate one of the continent's most vital food crops.

Africa is the world's largest producer of cassava, accounting for 57 percent of a crop that some 800 million people around the world rely on.

The plant's starchy, tuberous root is the third largest source of carbohydrates in tropical countries and a vital food for many subsistence farmers.

But a new disease, the brown streak virus, has spread in recent years, causing 90-100 percent losses in some infected crops, with researchers from 12 African countries calling for urgent action to avoid a looming "food disaster" for the continent.

"We call on governments to put in place an early warning system, a response strategy to this disease," Justin Pita, executive director of the West African Virus Epidemiology (Wave) program, said.

Corneille Ahanhanzo, a researcher in Benin, said not enough time, money and research was being committed to stop the disease's spread.

"It's time for us researchers to stand up against this disease that will be an 'Ebola for plants'," he told AFP.

First documented in East Africa, scientists have watched outbreaks of brown streak virus spread into parts of Central Africa, with fears it could push further west.

In Nigeria alone, Africa's most populous nation, cassava is a regular source of carbohydrate for 80 percent of the country's 180 million inhabitants.