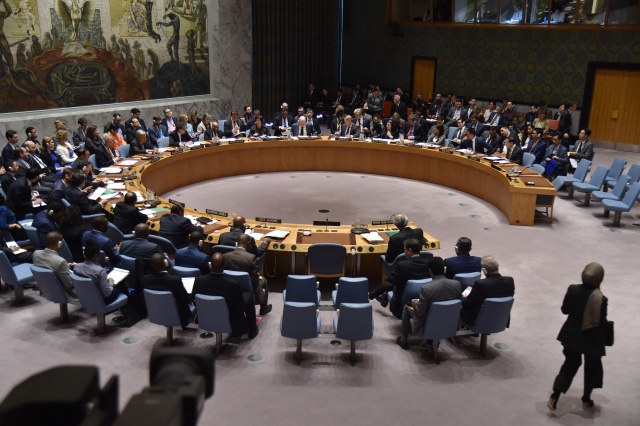 (AFP) - US President Donald Trump and his allies in Britain and France on Saturday hailed their joint surgical strikes in Syria over the regime's alleged use of chemical weapons, and warned Damascus that another such attack would be met with renewed firepower.

Hours later, the allies signaled their resolve to return to diplomacy, launching a new bid at the United Nations to investigate chemical weapons attacks in Syria.

They circulated a joint draft resolution at the Security Council that also calls for unimpeded deliveries of humanitarian aid, enforcing a ceasefire and demands that Syria engage in UN-led peace talks, according to the text obtained by AFP.

The narrowly targeted pre-dawn military operation, which took aim at three chemical weapons facilities, earned quick scorn from Russia, but a push by Moscow for condemnation of the strikes at the UN Security Council fell far short.

Trump and his allies ordered the rapid-fire overnight mission in response to a suspected chemical weapons attack a week ago on the rebel-held town of Douma that left more than 40 people dead.

Washington believes both sarin and chlorine were used in the April 7 attack, a senior US administration official told reporters on Saturday.

Both the regime of Syria's Bashar al-Assad and its ally Russia have denied all responsibility. Moscow slammed the "aggressive actions" of the Western coalition, but has not yet responded militarily.

US Ambassador Nikki Haley warned her UN counterparts that although the mission was designed as a one-off, that did not preclude further action against Assad.

"I spoke to the president this morning and he said: 'If the Syrian regime uses this poisonous gas again, the United States is locked and loaded,'" Haley said at emergency Security Council talks.

Negotiations on the draft resolution put forward by the US, France and Britain are set to begin on Monday.

Among the contentious proposals, it would establish an independent investigation of allegations of toxic gas attacks in Syria with the aim of identifying the perpetrators.

Russia in November used its veto three times to bury a previous UN-led inquiry which found that Syrian forces had dropped sarin on the town of Khan Sheikhun in April last year.

On the humanitarian side, the measure demands medical evacuations and safe passage for aid convoys to be allowed to all areas.

Diplomats said it remained unclear when the council would vote on the proposal, and they were ready to allow time for negotiations to bring Russia aboard.

UN Secretary-General Antonio Guterres earlier called for restraint, asking member states "to act consistently with the charter of the United Nations and with international law, including the norms against chemical weapons."

Just before dawn on Saturday, the sounds of massive explosions and the roar of warplanes rang out across Damascus for about 45 minutes.

"Could not have had a better result. Mission Accomplished!"

Trump drew some criticism for his choice of words: former president George W. Bush notoriously stood on an aircraft carrier just a few weeks after the initial Iraq invasion in 2003 in front of a "Mission Accomplished" banner.

The targets included a scientific research facility near Damascus, and two chemical weapons facilities outside the city of Homs, the US military said, though reports said the buildings had been evacuated in recent days.

Syrian state media reported only three people injured, while Russia's defense ministry said there were "no victims" among Syrian civilians and military personnel.

According to US officials, the operation involved three US destroyers, a French frigate and a US submarine. The vessels were located in the Red Sea, the Gulf and the eastern Mediterranean.

The strikes were the biggest foreign military action so far against Syria's regime.

"By working together, in a coordinated fashion, we can definitively prevent the Syrian regime from carrying out chemical attacks against its own people," Macron said on Twitter.

Assad, who has denied ever using chemical weapons against his opponents, responded to the strikes with a defiant vow.

"This aggression will only make Syria and its people more determined to keep fighting and crushing terrorism in every inch of the country," he said.

The targets appeared to steer well clear of any Russian personnel or equipment in Syria, where Moscow launched a military intervention in support of Assad in 2015.

The Russian military claimed Syrian air defense systems had intercepted 71 Western missiles, though the Pentagon flatly dismissed the claim and said all missiles hit their targets.

In central Damascus, dozens of Syrians arrived on bicycles, on foot and in cars spray painted with the red, white, and black colors of the Syrian flag, blaring patriotic tunes.

Despite the strikes, the Organisation for the Prohibition of Chemical Weapons said it was still pursuing its investigation into the Douma attack.

Thousands of rebels and civilians have since been bussed out of the town under a Russian-brokered deal. Syrian internal security forces entered Douma on Saturday and later said the town had been fully retaken.

Jaish al-Islam, the group that held Douma, said it only abandoned the town because of the chemical attack.

Ahmad, a 25-year-old mechanic who had been displaced from Douma, told AFP the Western strikes were nevertheless too little, too late.

"Assad won't collapse. They'll bomb for a day or two and then the regime will take it out on us," he said.