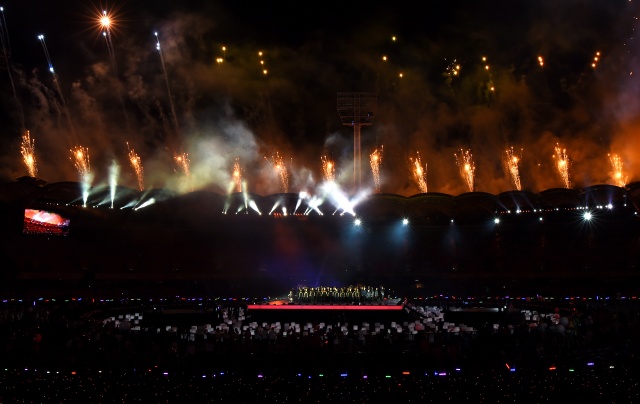 Fireworks erupt at the closing ceremony of the 2018 Gold Coast Commonwealth Games at the Carrara Stadium on the Gold Coast on April 15, 2018. (Anthony WALLACE / AFP)

(AFP) - Commonwealth Games Federation president Louise Martin urged all multi-sports tournaments to follow its lead and have equal medals for men and women as she insisted the competition still had a role in the modern era.

Martin said a rebranding exercise is under way for the Olympic-style event, which started as the British Empire Games in 1930 but is now keen to stress its promotion of "humanity, equality and destiny".

The just-concluded Gold Coast Commonwealth Games in Australia had medal equality between men and women for the first time and a para-competition was integrated into the main programme.

Asked about the image of the Games as a relic from bygone times, Martin told AFP: "Those who come from that era still think of it like that but now where we are in the modern Commonwealth, we are moving forward and we're embracing everybody.

"(We promote) our values of humanity, equality and destiny and encourage everybody else to do the same."

Martin said other multi-sports events should also shift to medal parity between men and women, although this year's Pyeongchang Winter Olympics had a record number of women and close to a 50-50 split between the sexes.

"Wake up, we're all in this together," she said, asked about the importance of having an equal number of medals.

"I think every other event should be trying to do the same so they have to make the programme, they have to look at scheduling and make sure that the male events don't dominate the female events.

"So we've managed it and other sports can do it too."

The Games also featured their first transgender athlete, New Zealand weightlifter Lauren Hubbard, who was warmly welcomed by the crowd and also endorsed by organisers.

However, there was also a series of protests by indigenous activists who dubbed them the "Stolenwealth Games", a reference to Britain's colonisation of Australia.

And there appeared to be discomfort when English diver Tom Daley, who is gay, pointed out that homosexuality remains illegal in 37 Commonwealth countries and territories.

As part of the revamp, Martin said she was also considering Duel in the Pool-style offshoots, potentially lining up the Commonwealth against major powers in sports such as swimming or athletics.

"We're in the process of talking about these things and yes, we want to take the Commonwealth slightly further," she said, taking inspiration from swimming's Duel, which pitted the United States against Australia or Europe.

"What we're trying to do is make sure that these athletes can get to compete against, say, the Americas or... one other country that we can have a fantastic competition with, like Duel in the Pool.

"Or an athletics event so that everybody can see the standard that we have within the Commonwealth."

She added: "When you start to see the athletes that have come here and the standard that they are, we can compete with anyone anywhere. And I think (they would be) fun events."

General » Be a reporter: Write and send your article » Subscribe for news alert
Tags: CGames, 2018, Martin