Cubans prepare to turn the page on Castro era 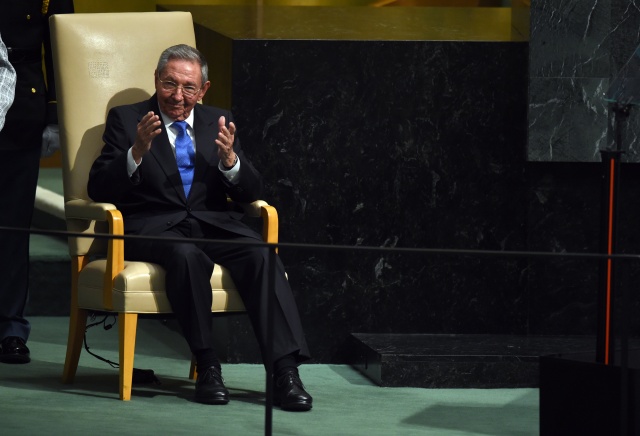 (FILES) In this file picture taken on September 28, 2015 Cuban President Raul Castro reacts after addressing the 70th Session of the UN General Assembly in New York. Cuba is preparing for the end of an era when on April 19, 2018 Raul Castro steps down as president, ending his family's six-decade grip on power and paving the way for a younger leader. (Timothy A. CLARY / AFP)

(AFP) - Cuban President Raul Castro steps down Thursday, passing the baton to a new generation in a transition that brings to a close the Castro brothers' six-decade grip on power.

"We have come a long way... so that our children, those of the present and those of the future, will be happy," Castro said in one of his last speeches as leader last month.

The 86-year-old has been in power since 2006, when he took over after illness sidelined his brother Fidel, who seized power in the 1959 revolution.

Between them, father of the nation Fidel and younger brother Raul ruled Cuba for nearly 60 years, making the Caribbean island a key player in the Cold War and helping keep communism afloat despite the collapse of the Soviet Union.

On Thursday, that chapter of history will come to a close when the National Assembly elects a new president of the Council of State, catapulting the island into the post-Castro era.

The Assembly will begin gathering on Wednesday, although the vote itself will take place on Thursday, with members widely expected to select current First Vice President Miguel Diaz-Canel, a gray-haired 57-year-old who has climbed the party ranks and has been Raul Castro's right-hand man since 2013.

The outgoing president will remain at the head of the Communist Party until its next congress in 2021 -- when he turns 90 -- time enough to ensure a controlled transition and to watch over his protege when, inevitably, old-guard communists challenge his reforms.

Cuban political scientist Esteban Morales said the two would likely work in tandem, with Castro continuing to act as the ideological figurehead, while Diaz-Canel concentrates on the "very complex and difficult" task of running the government.

The heir to the Castros will be faced with modernizing the economy at a time when Cuba's key regional ally Venezuela, its source of cheap oil, is stumbling through an acute economic crisis, and amid a resurgence of the US embargo under President Donald Trump.

On the island, the transition is fueling moderate debate between fervent Castro-ites and their critics, who expect few changes after the election, in which they have no direct participation.

Cubans last month elected a new National Assembly, whose 605 members are tasked with voting in the new president.

Retiree Raul Garcia, 79, said: "They say that Raul is leaving the presidency, and that another, younger, man will come. That's logical. But Raul is not leaving, Raul will always be with us, like Fidel."

As if to underscore a sense of continuity, the authorities are not planning a special ceremony for the assembly vote. And foreign journalists, anxious for an early look at the new president, have not been invited.

However, despite striving for a low-key transition, there's no getting away from the fact that this represents a monumental change in Cuba.

It will be the first time in almost six decades that the Cuban president will not be named Castro, will not be part of the "historic" generation of 1959, will not wear a military uniform and will not be the head of the Communist Party.

If elected, Diaz-Canel is expected to be able to make up for his lack of revolutionary pedigree with the support of Castro watching benevolently from his perch atop the all-powerful Communist Party.

The level of responsibility given to the old guard in the new government will be closely watched as a measure of how quickly change can be wrought by Diaz-Canel.

He will be expected to build on the reforms introduced by Castro in recent years, particularly those giving greater latitude to the island's tourism industry and small business sector.

The date of the historic vote is heavy with symbolism.

It falls on the 57th anniversary of the Bay of Pigs invasion, when the CIA tried to overthrow Castro in 1961, an episode Havana has long proclaimed as American imperialism's first great defeat in Latin America.