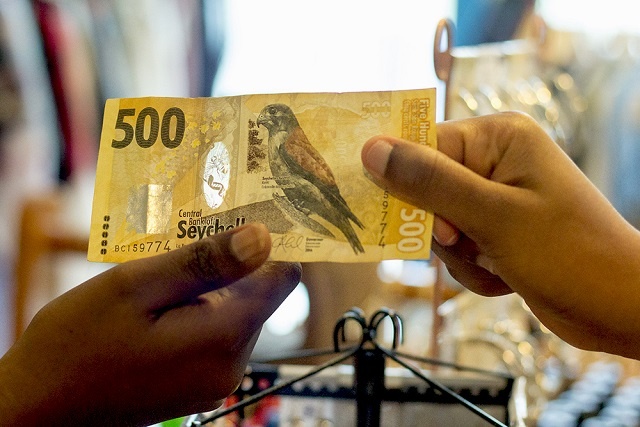 Seychelles' richest bank note -- the 500 rupee note -- was released into circulation in December 2016 and is worth about $37. SNA takes a closer look at seven of the endemic flora and fauna found on the yellow, brown and black note.

Seychelles Kestrel
Found on the front of the banknote, the Seychelles Kestrel, called Katiti in Creole, is the only day-flying bird of prey native to the 115-island archipelago in the western Indian Ocean. This small territorial bird has a very dark rufous upperpart with an even darker head and red-brown back.
Coming from the Falconidae family, the Seychelles Kestrel is mostly found on Mahe, but is also present on Praslin, Silhouette, North Island and Felicite. It does not build nest as most birds would – they lay eggs among rocks, on cliffs and on building ledges.
If one tilts the note and looks at the head of the Seychelles Kestrel, a 500 figure can be seen.
Scientific name: Falco araeus
Conservation status: Globally Threatened, Vulnerable
Feeds off: Geckos, skinks, small birds and insects
Horne’s Pandanus
Mainly confined to river ravines and on slopes with good water access, Vakwa Parasol as it is locally known can be seen on the front of the 500 rupees bank note to the right of the Seychelles Kestrel.
According to the IUCN red list of threatened species, the “there has been a massive population reduction of at least 30% in the last 100 years. Wetland clearance for cultivation may have been the main reason for this reduction.”
The fruit of the plant is cone-like similar to a pineapple.
Scientific name: Martellidendron hornei
Conservation status: Vulnerable
Areas found: Morne Seychellois National Park, Praslin National Park and Curieuse Marine National Park.
Seychelles Vinegar Fly
Located on the front side of the note, and can be seen within the transparent oval window on the back. The Seychelles Vinegar Fly belongs to the family of flies often called “small fruit flies” or “vinegar flies”. This is due to the tendency for them to linger round overripe rotting fruit.
The local endemic fly has earned the Creole name ‘Bigay Bwatorti’ as it is usually found near the Noni tree (Morinda citrifolia). The fly reproduces solely on the toxic fruit of the said tree.
Scientific name: Drosophila sechellia
Feeds off: fruit of Morinda citrifolia
Coco de mer
This is the only species of Flora or fauna to be featured on every series of notes since illustrations on the Seychelles paper currency started. On the front of the current 500 rupee note, one can see the male part of the tree, with the catkins flower providing a dual colour security feature under ultra-violet light.
The coco de mer is the world’s largest nut and grows in a natural state only on Praslin and Curieuse. Historically, the species was also known to grow naturally on Round, St. Pierre and Chauve-Souris. It is one of the country’s main symbol and pride.
Scientific name: Lodoicea maldivica
Conservation status: Endangered
Seychelles Scops Owl
Located on the back of the banknote, the Seychelles Scops Owl is a small-eared owl with greyish-brown feathers. Its eyes are large and yellow to orange-red in color. The bird can sometimes be heard calling from tall trees which sounds like the rasping noise of a big saw on wood, earning it the creole name ‘Syer’ (English for saw).
It is endemic to mainly the highland forests of Mahe, the main island of Seychelles. For many years it was thought to be extinct until they were discovered by a team from Nature Seychelles in 1999 and 2000.
Scientific name: Otus insularis
Conservation status: Endangered
Feeds off: Insects, spiders, possibly frogs and small lizards.
Seychelles Tiger Chameleon
The ‘Kanmeleon’, as known in the native language, is relatively small for a chameleon, only growing up to 16 centimeter in length. It can be found twice on the back of the 500 rupee note. When tilted, the shiny chameleon on the note changes color.
Its most distinctive features are small, spiky outgrowths that border the underside of its chin and the pointed projection on its chin.
The Seychelles Tiger Chameleon can be found in the Morne Seychelles, Praslin and Silhouette National Parks. Its main threat being invasive plants, especially cinnamon trees which provides shelter to a diminished population of insects that the chameleon feeds off.
Scientific name: Archaius tigris
Conservation status: Endangered
Wild Bilimbi
Known in creole as ‘Bilenbi maron’, the flower of the Wild Bilimbi is found above and below one of the illustration of the Seychelles Tiger Chameleon. In the past the wood of the tree was mostly used for firewood and to make charcoal.
The fruit is edible and it is said that it can be put on wounds. At the moment they are being grown at the National Biodiversity Centre at Barbarons.
Seychelles Buzz » Be a reporter: Write and send your article » Subscribe for news alert