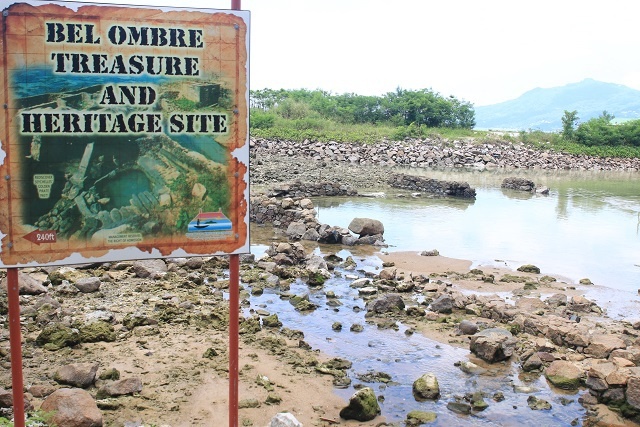 Partial view of the site at Belombre where the search for the hidden treasure of la Buse have been ongoing for nearly 70 years.  (Joe Laurence, Seychelles News Agency)

(Seychelles News Agency) - Are you an adventurous person? Are you fascinated with stories of buried treasure? Are you physically fit?  Then why not join the La Buse treasure hunt this Sunday as part of this year’s Heritage Week.

The senior project manager of the Seychelles Heritage Foundation, Cindy Moka, told SNA on Thursday that the event is to revive the historical treasure burial site at Bel Ombre - a district in the north of main island Mahe - where the La Buse treasure is said to be buried.

La Buse was the famous pirate Olivier Le Vasseur active in the 1700 and known for allegedly hiding one of the biggest treasures in pirate history, estimated at $1.4 billion.

Moka said the treasure hunt is divided in two parts – the code grid and the obstacle hunt. “For the code grid, five clues and a puzzle grid will be published in the Seychelles Nation from Tuesday April 17 until Sunday April 22. The shaded letters on the grid will give the answers to a location where the second part of the hunt will begin,” explained Moka.

As for the actual treasure hunt, which will take place on Sunday, Moka said: “The treasure hunters will meet at the location as per the last clue published in the daily paper. Then they will be given other clues which will eventually, if they can decipher the clues, lead them to the hidden treasure.”

Moka said “since the stories of the La Buse treasure at the Bel Ombre site is an integral part of our cultural heritage, it important to organize activities geared towards the transfer of knowledge from the older to the younger generation.” She added that this coincides with year’s theme -- Heritage for Generation.

The senior project manager added that the hunt will be very physical and hunters have to be very fit and prepared to take quick decision over clues given. The treasure is sponsored by jewelry company - Jouel - is worth $578.

La Buse Treasure Hunt is opened to residents aged 15 years and above. The number of hunters is limited to 25.

According to John Cruise-Wilkins - who decided to follow in his father’s footstep, Reginald Cruise-Wilkins, to dig for the La Buse treasure – “the event will help young people to learn more about the history of the pirates who are rumored to have visited the islands for their treasure sites.”

Cruise-Wilkins said as part of his contribution to the event he has shared information gathered over the years during his hunt for the treasure, adding that this will make the hunt more interesting.

The treasure hunter took over the search in 1988, a decade after his father passed away. Cruise-Wilkins said it was not difficult for him to continue in his father’s footsteps as he used to work alongside his father as a kid during the holidays and weekends.

The treasure is believed to be that of La Buse, who stole it from the Portuguese ship the Virgem do Cabo a week after Easter Sunday in April 1721.

Historical records state that the treasure buried in Seychelles, a group of 115 islands in the western Indian Ocean, includes a seven-foot high Cross of Goa made of solid gold and encrusted with precious stones, which took three strong men to carry.