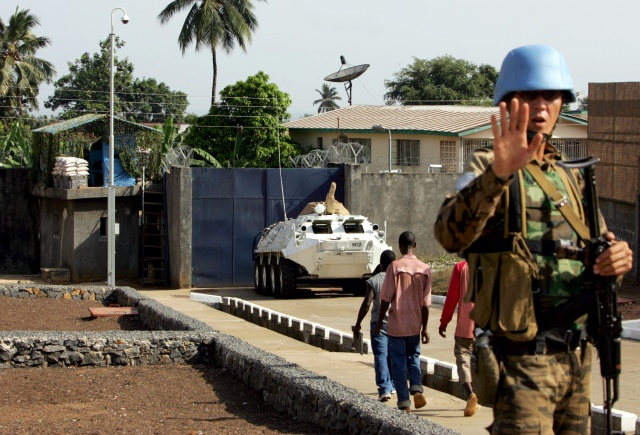 A soldier of the United Nations mission to Sierra Leone stands guard 31 March 2006 in front of the gate of the Special Court for Sierra Leone in Freetown, where former Liberian President Charles Taylor, extradited from Nigeria to Monrovia 29 March 2006, has been indicted for crimes committed during the civil war that ravaged his country from 1991 to 2001, killing up to 200,000 people. A Liberian former warlord whose forces committed atrocities including murders and cannibalism during the country's civil war was sentenced Thursday to 30 years in US prison -- for immigration-related fraud and perjury. (AFP PHOTO / ISSOUF SANOGO
ISSOUF SANOGO / AFP)

(AFP) - A Liberian former warlord whose forces committed atrocities including murders and cannibalism during the country's civil war was sentenced Thursday to 30 years in US prison -- for immigration-related fraud and perjury.

Jabateh was arrested in March 2016.

It is not the atrocities that will send the former warlord to prison, but rather lying about his past to American authorities as part of his 1998 asylum application and his subsequent bid for permanent residency, which saw him convicted in October of "two counts of fraud in immigration documents and two counts of perjury."

Prosecutors did, however, summon 17 Liberians to testify during the trial about the actions of Jabateh and his men, which allegedly included killing a village leader and bringing his heart to his wife with orders for her to cook it for them.

"This defendant committed acts of such violence and depravity that they are almost beyond belief," US Attorney William McSwain said in a statement.

"This man is responsible for atrocities that will ripple for generations in Liberia. He thought he could hide here but thanks to the determination and creativity of our prosecutors and investigators, he couldn't," McSwain said.

"This prosecution was our only option under the law and his sentence achieves at least some measure of justice for his victims," he said.

The fact that Jabateh is being held responsible at all is exceptional, as many people involved in the civil war still hold important positions in Liberia.

The establishment of a court for war criminals involved in the conflict, which left about 250,000 people dead, is an extremely sensitive topic.

Fearing for his safety, BBC journalist Jonathan Paye-Layleh recently decided to leave the country after a question about the subject prompted an angry response from Liberian President George Weah.

Journalist Hassan Bility, head of the Global Justice and Research Project, which works to document war crimes and see those responsible brought to justice, said Jabateh's sentencing was "a happy day" for the victims of atrocities in Liberia.

"We will continue to push for that until the government can bring the perpetrators to account for what they did during the war," he said.