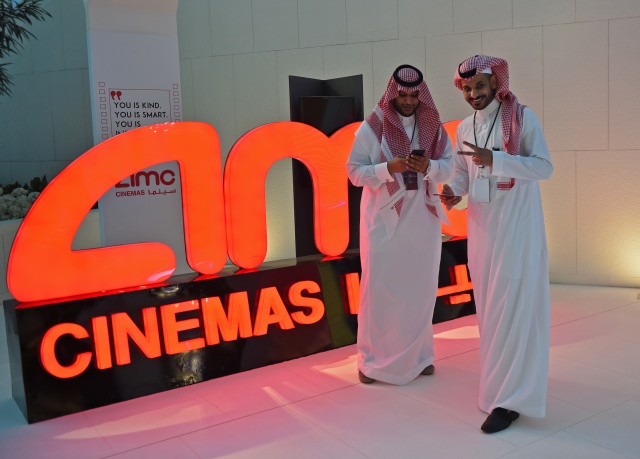 A Saudi man poses for a photograph during a cinema test screening in Riyadh on April 18, 2018. Blockbuster action flick "Black Panther" play at a cinema test screening in Saudi Arabia on April 18, the first in a series of trial runs before movie theatres open to the wider public next month. The conservative kingdom lifted a 35-year ban on cinemas last year as part of a far-reaching liberalisation drive, with US giant AMC Entertainment granted the first licence to operate movie theatres. (Fayez Nureldine / AFP)

Clutching prized tickets for what AMC said was a sold-out showing of Hollywood blockbuster action film "Black Panther", men and women walked into the movie hall with tubs of popcorn and fizzy drinks.

Families huddled around movie posters to take selfies, soaking up an experience that is mundane in most parts of the world but a novelty in the ultra-conservative desert kingdom.

AMC chief executive Adam Aron on Wednesday said its multiplex theatre at Riyadh's King Abdullah Financial District will for now operate one screen with a seating capacity of around 250.

He said plans were afoot for three more screens in the coming months.

Access to the tightly guarded cinema complex, although open to moviegoers is highly restricted.

An AFP reporter was invited to Friday's opening but was not allowed by AMC and Saudi authorities to talk to audience members or attend the screening.

Religious hardliners, who have long vilified movie theatres as vulgar and sinful, were instrumental in shutting down cinemas in the 1980s.

Reopening movie theatres is part of Crown Prince Mohammed bin Salman's ambitious reform drive as he seeks to balance unpopular subsidy cuts in an era of low oil prices with more entertainment options -- despite the risk of riling hardliners.

The choice of "Black Panther", a film about a young monarch of a fictional resource-rich African kingdom, has drawn parallels with the Saudi prince.

An AMC official said the movie chain could possibly release the much-anticipated thriller "Avengers: Infinity War" at the cinema next week, around the same time as its global release.

On social media, many Saudis complained that the ticket price of 75 Saudi riyals ($20), which included a new entertainment tax and value-added tax introduced this year, was too exorbitant in an age of austerity.

"If we go as a family we will need a loan," one Saudi quipped on Twitter.

"Welcome to the era when movies can be watched by Saudis not in Bahrain, not in Dubai, not in London... but inside the kingdom," Aron said Wednesday at the launch of the theatre.

International theatre chains have long eyed Saudi Arabia with its more than 30 million people as the Middle East's last untapped mass market, the majority of whom are under 25.

AMC will face stiff competition from heavyweights such as Dubai-based VOX Cinemas, which on Thursday announced it had also secured a government licence to operate in Saudi Arabia and would open the kingdom's first IMAX theatre in the coming days.