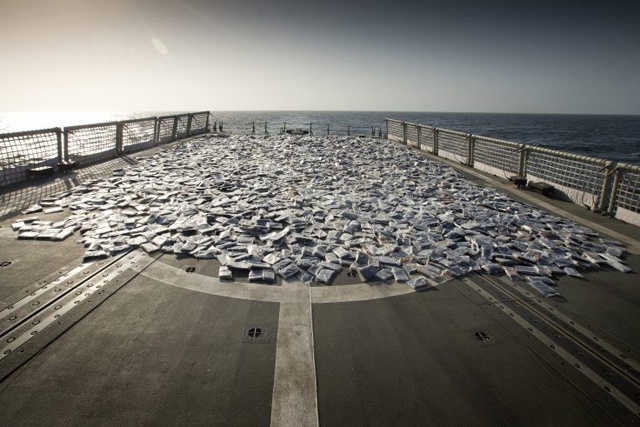 Over six tons of hashish seized during a recent boarding is displayed on the flight deck of HMAS Darwin, prior to the destruction of the drugs (Combined Maritime Forces)

(Seychelles News Agency) - The crew of the Australian naval frigate HMAS Darwin has seized and destroyed 6.2 tonnes of hashish valued at $250 million in what has been confirmed as the largest ever seizure of the illegal drug made in the Indian Ocean, according to a press statement from the Combined Maritime Forces (CMF).

The CMF is a multi-national naval partnership operating across approximately 2.5 million square miles of international waters. Their main focus is on fighting terrorism and piracy as well as working towards the general safety and security of the world’s international shipping lanes.

HMAS Darwin, which is currently operating in support of the CMF’s maritime security unit called the Combined Task Force 150 (CTF-150), made the bust on June 28, off the Eastern coastline of Africa during a routine boarding check on local fishing vessels. The nationality of the drug smugglers was not disclosed.

Hashish resin was found hidden away inside the hull of the dhow in 306 hessian bags each containing approximately 20 one-kilogram bags. The drugs, which almost completely covered the deck of the navy frigate, were subsequently destroyed at sea.

This is the second large haul in just over a month for HMAS Darwin, which recently intercepted a dhow in the Arabian Sea which was found to be carrying 786 kg of hashish on board.

This latest seizure is the eighth during the ship’s current deployment in the waters surrounding the Middle East. On 23 April the ship discovered just over a tonne of the drug on a dhow off the coast of East Africa.

The proceeds from the sale of illicit drugs such as these are thought to be utilized to fund terrorism for various terror groups.

“HMAS Darwin remains focused on the war against funding for terrorist organizations and I am proud of the continued dedication and professionalism of the crew onboard HMAS Darwin and the role they play as part of the Combined Maritime Forces,” said Commander Terry Morrison, the commanding officer of the HMAS Darwin.

The Commander of CTF-150, Commodore Jeremy Blunden of the Royal Navy, noted the continued success of HMAS Darwin while supporting CMF.

“Yet again HMAS Darwin has delivered an outstanding result,” he said. “My congratulations to Commander Morrison and his very fine ship’s company who have set new standards for professionalism and teamwork in counter narcotics activity in the Indian Ocean.”

In addition to anti-drug operations the Royal Australian Navy warships have been engaged in counter piracy in waters off the Horn of Africa and anti-terrorist patrols to secure oil terminals in the Arabian Gulf.

The Deputy Commander of the CMF, Commodore Keith Blount (OBE) of the Royal Navy, said: “I am particularly delighted with this latest seizure. Yet again, this was a coordinated piece of activity which shows what CMF can achieve. Both CTF-150 and HMAS Darwin should be rightly proud of their efforts.”

Swedish woman appears to have drowned off Seychelles' Praslin island