$ 41 million secured for extension and rehabilitation of Seychelles main port 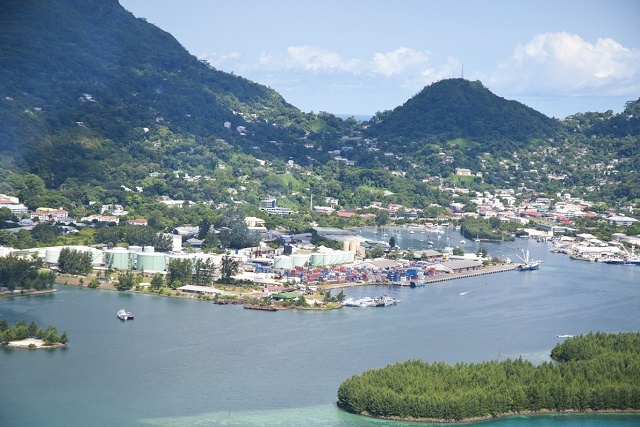 The project to expand and upgrade Port Victoria entails the detailed design and construction of a new quay. (Gerard Larose, Seychelles Tourism Board)

(Seychelles News Agency) - The Seychelles Ports Authority has received $41 million for the extension and rehabilitation of Mahe Quay, the main commercial port on the main island of Mahe.

The amount has been secured by the Seychelles government through loans and a grant from the island nation's European partners.

Two loans together worth $35 million are from the Agence Française de Développement (AFD) and the European Investment Bank (EIB). The European Union (EU) has also provided a grant of around $6 million.

In a signing ceremony between Seychelles and its partners at State House on Thursday, the Minister responsible for Tourism, Civil Aviation, Ports and Marine, Maurice Loustau-Lalanne, said that the modernization of the port is long overdue since it became operational in 1973.

“The extension and modernisation of the port will lead to mass transportation and decreased unit cost that will benefit the consumers,” said Loustau-Lalanne.

The Minister added that the Authority “expects much larger container ships and fuel tankers to call at Port Victoria which will no doubt lead to more mass transportation, decreased unit cost and thus we would expect to see a saving on shipping costs. If this benefit is passed on to the consumers, we should expect a decrease in the cost of living in the country as a consequence.”

The project, which is expected to start in mid-2019, will take two years to complete. The modernisation work will include the construction of a new quay, offset from the new quay to more than 600 metres.

The expansion is expected to cater for two vessels to moor at the same time and to accommodate larger vessels. Space will be made available for the installation of two mobile cranes for loading and unloading of ships, storage yards and warehouses among other facilities.

EIB's Head of Regional Representation for Southern Africa and the Indian Ocean, Tom Andersen, said that this project is crucially important for the island nation.

“We expect the project will have a significant impact on the Seychelles economic competitiveness, employment creation, and sustainable growth as well as support the local industry.” The European Investment Bank has made available a loan of $15 million for this project.

The Agence Française de Développement, which is providing $20 million, said that after financing significant investment in the ports of the region mainly in Mauritius and Reunion, AFD is proud to be part of the ‘European Alliance’ to fund a key piece of infrastructure in Seychelles – a group of 115 islands in the western Indian Ocean.

The EU Ambassador to Seychelles, Marjaana Sall, said the port of Victoria is one of the first projects in the Indian Ocean region to be funded through the Africa Investment Facility, which is part of the European External Investment Plan.

“The port project along with a $12 million EU economic partnership agreement package for Seychelles to be signed later is part of EU support for Seychelles’ ambitious integration agendas,” explained Sall.

Sall said that “those projects will help boost investment in Seychelles, ensure that its exports are competitive and facilitate access to the global market.”

The project to expand and upgrade Port Victoria entails the detailed design and construction of a new quay, offset from the existing quay, and demolition as necessary of the existing quay. With the extension of the port’s yard area and further dredging, it will allow larger vessels into the harbour and increase overall port capacity.

This project comes at a time where Seychelles is also becoming increasingly popular for cruise ships. This cruise season three dozen cruise ships are expected compared to last year where around 30 cruise ships docked in Seychelles’ Port Victoria.Once the project is completed, it is expected that it will increase the port’s safety and environmental performance in the handling of goods, and lead to an overall improvement in the efficiency of port operations. The Seychelles Ports Authority will also be provided technical assistance at a cost of $2 million.

Last year the island nation came out as the top sought-after destination for cruise ships in the region, winning the Indian Ocean’s Leading Cruise Destination at the World Travel Awards 2017.