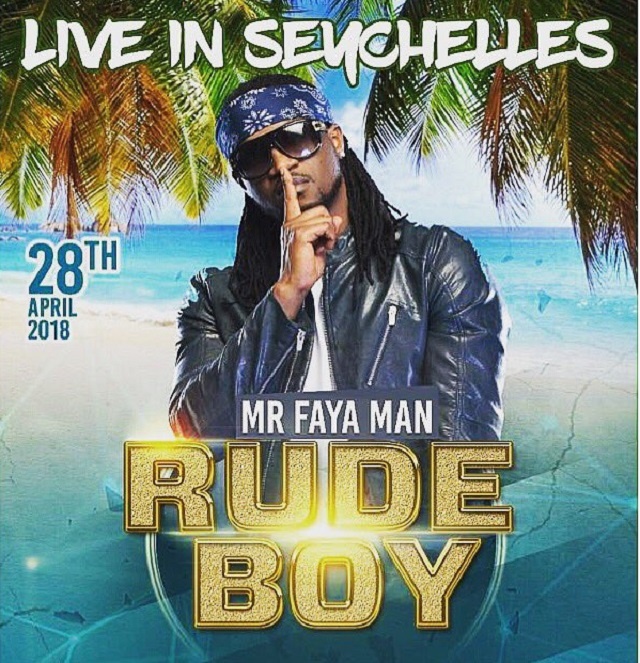 The Nigerian singer is expecting a massive concert on Saturday evening at the Mini Stadium in Victoria. (Seychelles Nation)

(Seychelles News Agency) - Nigerian singer Rudeboy will bring some heat to the Seychelles’ capital with his popular hit ‘Fire Fire’ among many others as he takes the stage on Saturday evening.

Rudeboy will be performing at the mini stadium in Victoria, the capital of the island nation, as of 8 p.m. His fellow Nigerian, IC OmoAllen, will also be on stage as well as well-known Seychellois artists such as Elijah, Mercenary and Jakim.

Tickets for the performance are still on sale at Dara’s Plus (ex Kot Do), Victoria and at the entrance on Saturday evening. Normal tickets cost SCR200 ($14) and VIP tickets are SCR1,000 ($72). A VIP ticket includes a meet and greet with the Nigerian star as well as a photo with him, among other perks.

In an interview with SNA on Friday, Rudeboy said that he is excited for the concert despite the weather being gloomy. Since his arrival in the island nation on April 25, Rudeboy has given several interviews to the press.

“I’ve been to radio stations and the way that people welcomed me, I can tell that it is going to be a massive concert,” said Rudeboy.

He has also used the opportunity to film the video clip of his most recent single ‘IFAi’ that was released some days ago.

Rudeboy told SNA that ‘IFAi’ is a love song “and at the same time we are using the video to show how beautiful this place is and that is why I came earlier.” The video was shot at the Eden Bleu Hotel, on Eden Island.

Other popular hits of his include 'Nkenji Keke' and 'Somebody Baby'. Most of the songs sung by the Nigerian star was in the twin-brother-duo, P-Square, with well-known tunes such as ‘Shekini’, ‘Alingo,’ 'Chop my money'  and ‘Personally’.

Rude Boy -- born as Paul Okoye -- gained popularity with the Nigerian Afrobeat and R&B group P-Square with his identical twin brother Peter Okoye. The group, considered as the richest and most influential artists in Nigeria, broke up last year and the two brothers went solo as Rude Boy and Mr P.

Talking about Seychelles, a group of 115 islands in the western Indian Ocean,  Rudeboy said that the atmosphere “in Seychelles is very good, very welcoming and everything is beautiful.”

“To me, it is like a holiday as much as I am here for business and to perform. I am using the opportunity to have fun as well,” he said.

One of his wishes is to see the beauty of Seychelles used more in music videos of local artists.

“You guys have a lovely place but when I look at the music videos, I don’t see that. I think they should focus on the atmosphere because you guys have everything. If this place was somewhere in Nigeria, trust me, the whole world would know about it,” said Rudeboy.