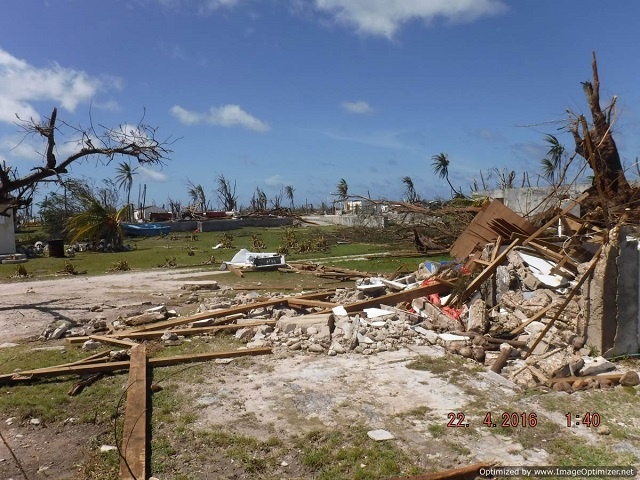 A scene of devastation that was caused by the cyclone Fantala that hit Farquhar in April 2016. (IDC)

(Seychelles News Agency) - Seychelles is set to get automatic weather stations on seven of its outer islands following the signing of an agreement between the Islands Development Company (IDC) and the Meteorological Authority last week.

The automatic weather stations which are automated versions of the traditional weather stations will be set up on Coëtivy, Alphonse, Providence, Farquhar, Assumption, Cosmoledo and Astove. One inner island, Silhouette, managed by IDC, will also get a station.

According to the chief executive of the Seychelles Meteorological Authority, Vincent Amelie, the weather stations are important for recording and collecting data about the climate of the southern islands.

“It is important that we start expanding our coverage of weather forecasts to also include outer islands because all the information we have recorded over the years has always been collected on Mahe and neighbouring countries,” said Amelie.

The stations are expected to cost approximately $18,000 each and will be funded by IDC. The first station is expected to be on Farquhar in a month’s time.

Farquhar was the hardest-hit of a group of southerly outer islands in Seychelles, an archipelago in the western Indian Ocean, by the tropical cyclone Fantala in mid-April  2016.

Amelie said that there are indications that nowadays cyclones are forming closer and closer to the Seychelles’ outer islands.

“It will also increase our observation network that will not only cover Mahe and the inner islands but those further so that we can better understand what’s going on with our climate in the region,” said the chief executive.

He said that it is common knowledge that Seychelles has only one rainy season but this is only around Mahe.

“There are indications that Aldabra may have two rainy seasons in a year but we need information to justify that this is the case,” he said.

Amelie said that the weather stations on the outer islands will help the Seychelles Meteorological Authority to also help other sectors that need such data for their own research.

The agreement was signed as part of the 38th-anniversary celebration of the Islands Development Company. The company was set up in April 1980 to create a structure to enable the economy of the outer islands to be developed. IDC is currently responsible for 13 outer islands and Silhouette.

Speaking at the signing ceremony, the chief executive said that the agreement is “yet another milestone for IDC since the setting up of the weather stations is predicted to result in better data collection for weather forecasting and will provide IDC with accurate information for its flights.”