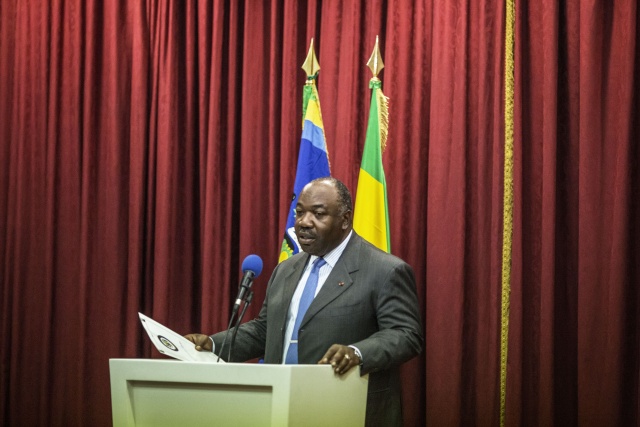 Gabon's President Ali Bongo Ondimba delivers a speech during a press conference on September 1, 2016. Around 1,000 people have been arrested in Gabon in violence that followed the announced re-election of President Ali Bongo, the interior minister said on September 1, 2016. "In Libreville there were between 600 and 800 arrests, and between 200 and 300 in the rest of the country," Pacome Moubelet-Boubeya told a news conference. Earlier, Bongo condemned the violence which saw the national assembly set ablaze, saying "Democracy doesn't sit well with an attack on parliament." (MARCO LONGARI / AFP)

(AFP) - Gabon's government resigned on Tuesday, the day after the constitutional court dissolved the national parliament and also called for the country's leadership to step down over election delays.

According to the court, the government should have organised twice-delayed elections by April 30 at the latest.

The powers of the disbanded National Assembly will be transferred to the upper house Senate until elections are held, the court added. A date for the ballot is yet to be announced.

Violence broke out days after the vote, and opposition figures say more than 50 people were killed in clashes. The official toll was only three dead.

Bongo took over power from his father Omar Bongo, who had ruled for 41 years until his death in 2009.

Gabon has large oil, mineral and tropical timber resources, and its per-capita national income is four times greater than that of most sub-Saharan nations.

But about a third of its population of 1.8 million still live below the poverty line -- the result, say experts, of inequality, poor governance and corruption.