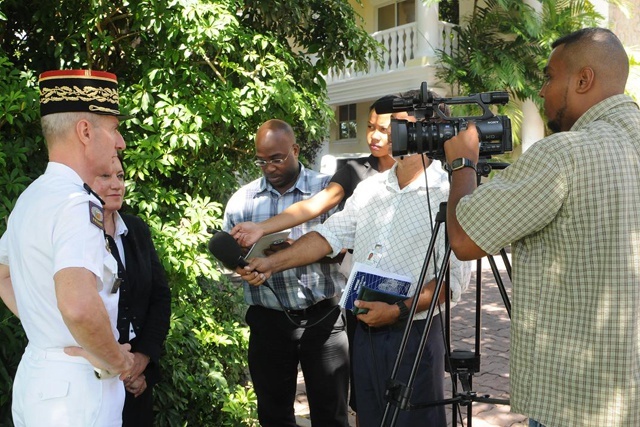 An executive member of the Association of Media Practitioners Seychelles said the ranking shows that Seychelles has made some remarkable improvement when it comes to free press and dissemination of information. (Louis Toussaint)

(Seychelles News Agency) - Seychelles is ranked 85 out 180 countries in the 2018 World Press Freedom rankings, moving up and improving two places from last year.

The index is compiled and published by Reporters Without Borders (RWB), a Paris-based non-governmental organisation. The release of the rankings coincides with World Press Freedom Day on May 3, a date which celebrates the fundamental principles of press freedom around the world.

An executive member of the Association of Media Practitioners Seychelles (AMPS), Barbara Coopoosamy, told SNA that this ranking shows that Seychelles has made some remarkable improvement when it comes to free press and dissemination of information.

“As a whole, improvements have come in different form. For example, we have seen changes in the two key media houses ... the Seychelles Broadcasting Corporation (SBC) and Seychelles Nation (NISA),” Coopoosamy said.

A board set up for both media houses has led “to a change in the composition and the way information is presented to the public,” she said, adding that “other independent news outlets have also played a good role in improving the ranking.”

The chief executive of the Seychelles Media Commission, Ibrahim Afif, said that although the ranking is showing progress, it doesn’t mean that he is happy about it.

According to the report, the size and remoteness of the 115-island archipelago in the western Indian Ocean limit advertising revenue and job opportunities for journalists. As a result “the general-interest media practice a degree of self-censorship in order not to endanger their earnings from advertising.”

Afif said that in Seychelles there are no laws that prohibit access and dissemination of information. He added that the Commission is lobbying the government to decriminalise defamation laws and hopes that this will give Seychelles a better ranking in the future.

The defamation law was also mentioned in the report which stated that “although Seychelles has strict defamation laws, they have not been used for years and there are few reports of abuses against journalists. Efforts were made in 2015 to improve the transparency of the media regulatory body.”

At the top of the Index are three European countries: Norway, Sweden and Netherlands. Ghana was the top-ranked African country, ranking 23rd. North Korea is at the bottom of the Index.

The Press Freedom Index is an annual global survey covering around 180 countries which ranks the degree of freedom that journalists, news organisations and netizens (citizens of the internet) have in each country, and the efforts made by authorities to respect this freedom. The first edition was published in 2002.