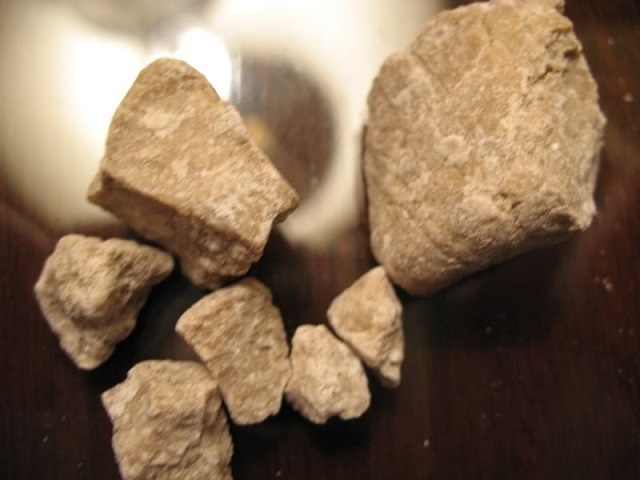 The results showed that the population of heroin users in Seychelles aged 15 years and above is around 4,800. (Heroin chunks, jlcoving, Wikipedia, CC-O)

(Seychelles News Agency) - IIlegal drug use in Seychelles, especially heroin, has increased to an alarming rate, said the secretary of state responsible for the prevention of drug abuse and rehabilitation.

Patrick Herminie spoke to SNA on Thursday after a respondent-driven survey entitled ‘Seychelles Biological and Behavioural Surveillance of Heroin Users of 2017’ was conducted.

The study which was commissioned by the Agency for the Prevention of Drug Abuse and Rehabilitation was conducted to determine the population size of heroin users out of the present population of people aged 15 and over.

The results showed that the population of heroin users in Seychelles aged 15 years and above is around 4,800 which equals to 5.6 percent of the population range.

Herminie said that this is quite high for a small population like Seychelles, an archipelago in the western Indian Ocean. Seychelles has a population of 95,843 according to the latest figures given by the National Bureau of Statistics.

This was echoed by Joseph Fady Banane, the network coordinator of ‘Drug Utilisation Response Network Seychelles’, a not-for-profit organisation.

Banane told SNA that the survey’s result is very alarming and that the whole society needs to help address this problem.

“It needs to be dealt with as soon as possible if the country wants to have a productive future generation,” said Banane.

The organisation is raising awareness at the grass root level and Banane said addicts are not judged but that they are provided support to be able to get off the substance.

The secretary of state responsible for the prevention of drug abuse and rehabilitation, Herminie, said that the survey provided information on who is using heroin and what are the patterns of the users.

“Most of the addicts are among the male population in the age of 15 to 50 years. At this age, they are supposed to be working. It is not a surprise why we have a lot of foreigners in the country as a large group of our working force is not productive,” Herminie said.

He added that the level of criminality has also gone up as the heroin drug users try to do all sort of illegal activities to fund their next fix.

“These are people mostly leaving alone after being rejected by their family for using drugs, who have not finished school and some were sexually abused during childhood,” he said.

Herminie said that the survey will help the Agency for the Prevention of Drug Abuse and Rehabilitation to find ways to tackle the problem.

The first step is “to make the society more resilient, help rebuilt the family foundation and bring a more aggressive programme for prevention, rehabilitation and aftercare,” Herminie added.

Looking ahead, Herminie said that they are going to work on a master plan.

“This will include the creation of more rehabilitation centre, establishing a strong community-based and school prevention programme, and encouraging more NGO’s to give a helping hand, and improving our workforce,” he said.

General » Be a reporter: Write and send your article » Subscribe for news alert
Tags: National Bureau of Statistics, Drug Utilisation Response Network Seychelles, Agency for the Prevention of Drug Abuse and Rehabilitation