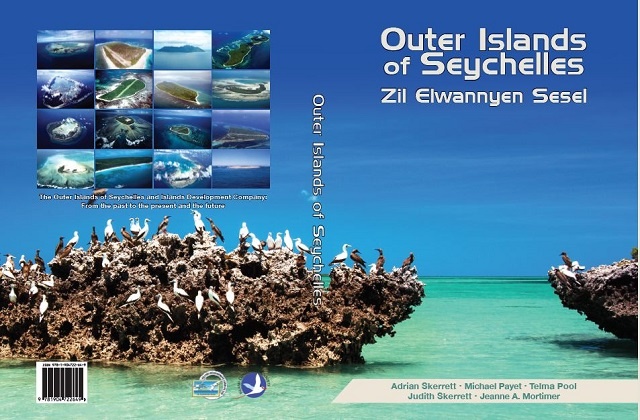 The second edition of "Outer Islands of Seychelles' has several new additions gathered by the original team and by new writers. (IDC)

(Seychelles News Agency) - The Islands Development Company (IDC) of Seychelles has published a second edition of the book ‘Outer Islands of Seychelles’ by Adrian Skerrett to because of high demand, said an official of the company.

“The first edition of the book was very popular and has been almost completely sold out, while there has been a continuous demand for the publication. Hence, we decided to print a second edition with new additions,” said Michael Payet, the Public Relations and Communications Manager of IDC.

The book will be available for sale in the coming weeks at around $33 (SCR450).

According to Payet, IDC decided to publish the book eight years ago as “there is a lack of resources on the outer islands of Seychelles.”

“Therefore, IDC took the decision to publish a book about the outer islands, highlighting the history, events, conservation, activities and stories from people from the islands,” he said.

The second edition -- launched as part of the company’s 38th anniversary last week -- has several new additions gathered by the original team and by new writers Michael Payet, Jeanne Mortimer and Judith Skerrett.

The new items include interviews done by Payet, one from Jeanne Mortimer on her life as Madanm Torti (turtle lady), new chapters from Skerrett about the cyclones, piracy and interviews with Glenny Savy about tales from the islands.

There are also new stories on the conservation of the islands and the team of writers has in this edition highlighted the past livelihoods and stories of people like former and actual workers of the islands.

Skerrett said that the writers' contributions have added value to the book “as a reference book and it is something that I think will be valuable not only in homes across Seychelles but in schools, too.”

He said there are more photographs, more scientific and conservation articles showing the Island Development Company’s work to protect the islands and the scaring visits of Somali pirates.

“The proceeds of the book will go towards helping the work of the Island conservation society in the outer islands,” says Skerrett.