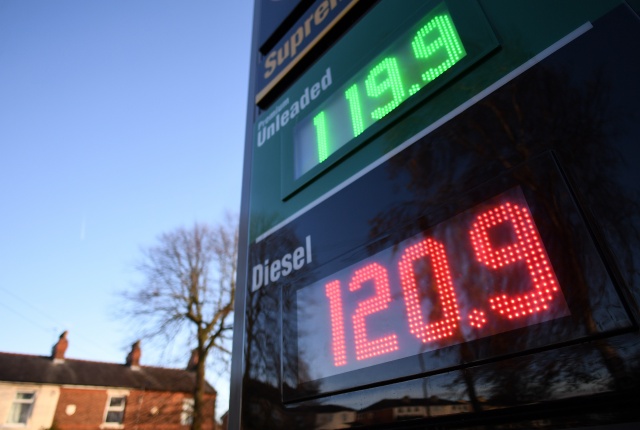 An electronic display board shows the price of diesel and unleaded petrol fuels outside of a filling station in Birkenhead, north-west England on November 20, 2017. (Paul ELLIS / AFP)

Both main crude contracts have been rising in recent weeks to reach three-and-half-year highs on expectations the US president would withdraw from the 2015 pact, which opened up Tehran's atomic programme in return for an easing of sanctions.

In an address Tuesday, he said he would pull out of the accord -- which was agreed by Britain, China, Germany, Russia and the Obama administration -- calling it "defective at its core".

Iran's President Hassan Rouhani said the country could now resume uranium enrichment "without limit" but would discuss its response with the other signatories before making a decision.

With the move already priced into markets, WTI and Brent sank soon after the announcement with some commentators suggesting Trump could still pedal back on some of his rhetoric and shift to a more diplomatic tone.

However, they bounced back strongly in Asia and there is talk crude could continue rising to $80 a barrel, with gains helped by uncertainty in oil-rich Venezuela, the OPEC-Russia output cap, improving global demand and data pointing to a drop in US stockpiles.

"Given the unilateral move by the US, much of the movement on oil prices had been factored in," said Stephen Innes, head of Asia-Pacific trade at OANDA.

He said that the market would continue to be supported by other factors, adding that "even without Iran sanctions oil prices will remain firm".

The hike in oil prices boosted regional energy firms, with CNOOC and Sinopec up more than two percent and PetroChina piling on 4.4 percent in Hong Kong. Inpex added one percent in Tokyo. Sydney-listed Woodside Petroleum and Rio Tinto were also sharply up.

Despite the energy sector's gains, Asian equity markets fluctuated through the day and struggled to keep track.

Tokyo and Hong Kong both ended up 0.4 percent but Shanghai was 0.1 percent lower.

Singapore added 0.2 percent, Seoul was down 0.2 percent while Sydney was 0.3 percent higher. Manila and Bangkok fell but Jakarta, Wellington and Taipei were in positive territory.

National Australia Bank's strategist Ray Attrill said in a commentary: "It's early days in terms of how the (Iran) decision will play out in terms of heightened geopolitical stress in the Middle East."

On currency markets, the dollar dipped against the pound and euro but held most gains after Federal Reserve boss Jerome Powell indicated the central bank would press on with raising interest rates, and that the risks to emerging markets were limited.

"There is good reason to think that the normalisation of monetary policy in advanced economies should continue to prove manageable for (emerging market economies)," he told a conference in Zurich on Tuesday.

The greenback was well up against most other high-yielding currencies with the South Korean won off 0.5 percent, the Malaysian ringgit down 0.1 percent and the Indonesian rupiah 0.2 percent lower.