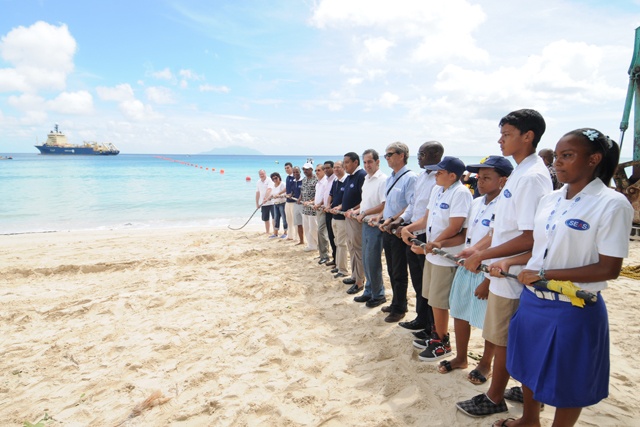 Launching of the undersea fibre optic cable at Beau Vallon in 2012. (Mervyn Marie)

(Seychelles News Agency) - The Seychelles Cable System company and the government of Seychelles have agreed to invest in a second fibre-optic cable.

The communications upgrade, likely to come late next year, is meant to ensure that residents and visitors are able to stay connected to the outside world should anything happen to the current cable.

The Principal Secretary of the Department of Information Communication Technology, Benjamin Choppy, told SNA on Monday that the government is not aiming at making money out of the second cable but rather to ensure telecommunication services connection security for all.

At the moment Seychelles, a 115-island archipelago in the western Indian Ocean, has only one fibre-optic cable, built under the Seychelles East Africa System (SEAS). It connects the main island -- Mahe -- to Dar Es Salaam, in Tanzania.

During his 2018 State of the Nation Address, President Danny Faure, said that “in case of an accident with the first cable, [the second cable] provides an alternative route. Progress has been made and telecommunications companies Airtel and Cable and Wireless have agreed to invest in this second cable, together with the Government.”

The Seychelles East Africa System supports over 90 percent of internet traffic in the country with the amount on the satellite being minimal, Choppy explained.

“If ever there is an interruption or cut on the fibre-optic cable, with the discussions that we've had with the main operators, it is almost impossible if not impossible for them to shift this amount of traffic onto the satellite in a short period of time,” said Choppy.

Should a cut occur at the moment, traffic diverted to the satellite will have to be prioritised. Due to commercial sensitivity, the cost of the investment was not disclosed.

The implementation of the new cable, which will not be a direct link, is expected to happen between late 2019 and 2020.

“We are considering joining one of the cables that will be built in the region. There are always new projects coming up in the submarine cable sector and we are looking at joining a bigger cable that will be built,” said Choppy.

In 2012, a few months after the first cable landed on Mahe, there was a cut on the undersea cable. Choppy said that even though traffic on the cable was not as high as today, its effect was felt. It took the company about a month to repair the cable.

Mid-January this year telecommunication services in the country were interrupted for close to half a day due to civil work carried out in Dar Es Salaam.

“Even then we noticed the interruption that it caused - everyone was waiting for the afternoon to be connected again. This was a planned operation done on the ground and you can now imagine what will happen if there is an unplanned cut, especially underwater,” said Choppy.

The principal secretary said the repair work length depends on the availability of marine repair vessels. The actual repair work can take between two to three weeks but due to the travel time and availability of the vessels, the total length can double or even triple.