US offers to work with Europe on new Iran deal, holds out sanctions threat 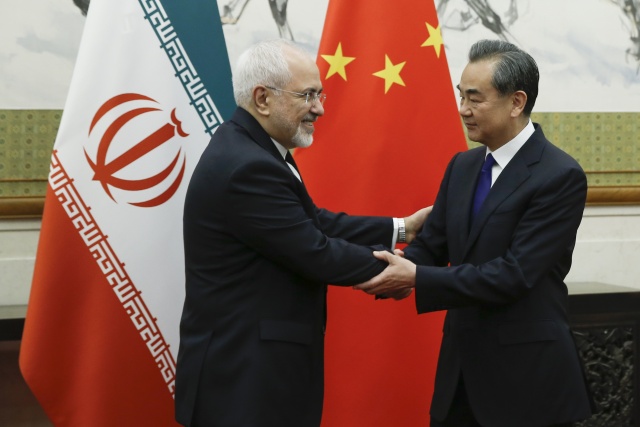 Chinese State Councillor and Foreign Minister Wang Yi (R) meets Iran's Foreign Minister Mohammad Javad Zarif at the Diaoyutai state guesthouse in Beijing on May 13, 2018. Iran's foreign minister arrived May 13 in Beijing on the first leg of a whirlwind diplomatic tour designed to try and rescue the nuclear deal left on the brink of collapse after the US pulled out. (THOMAS PETER / POOL / AFP)

But while Secretary of State Mike Pompeo talked up the prospect of renewed coordination with America's allies, another top aide reminded Europe its companies could face sanctions if they continue to do business with the Middle Eastern power.

The development came as Iran's foreign minister said he was hopeful of forging a "clear future design" for the pact, while speaking in Beijing at the start of a diplomatic tour aimed at rescuing it.

Trump's announcement last Tuesday that the US was exiting the 2015 nuclear accord was met with widespread dismay among its other signatories -- China, Russia, France, the Britain and Germany.

But Secretary of State Mike Pompeo said Washington was keen to thrash out a more wide-ranging deal with its European partners.

Pompeo, who is barely a fortnight into his new job, told Fox News Sunday that he had been tasked by the president "to work to strike a deal that achieves the outcomes that protect America."

"That's what we are going to do and I will be hard at it with the Europeans in the next several days," said the top US diplomat.

"I'm hopeful in the days and weeks ahead we can come up with a deal that really works, that really protects the world from Iranian bad behavior, not just their nuclear program, but their missiles and their malign behavior as well.

The administration says the lifting of sanctions as part of the nuclear pact had allowed Iran to build up its military.

"Remember how badly Iran was behaving with the Iran Deal in place," he tweeting. "They were trying to take over the Middle East by whatever means necessary. Now, that will not happen!"

With Pompeo seemingly assuming the "good cop" role on behalf of the Trump administration, it was left to newly appointed US national security advisor John Bolton to remind Europe its firms could be punished if they didn't adhere to American measures.

"It's possible," Bolton said on CNN when asked about the prospect of sanctions. "It depends on the conduct of other governments."

"The consequences of American sanctions go way beyond goods shipped by American companies because of our technology licenses to many other countries and businesses around the world. As those sanctions kick in, it will have an even broader effect as well," he said.

"I think the Europeans will see that it's in their interest, ultimately, to come along with us."

While he has committed to remaining in the nuclear agreement, French President Emmanuel Macron floated the idea of a supplemental deal on Iran during a recent visit to Washington.

Macron and Trump spoke by phone on Saturday, with the US president urging "the need for a comprehensive deal that addresses all aspects of Iran's destabilizing activities in the Middle East," according to a White House readout of the call.

German leader Angela Merkel also told Trump on a visit to Washington late last month that the nuclear deal was insufficient in itself to curb Iran's ambitions in the region.

Although most analysts believe the US withdrawal has effectively scuppered the agreement, Iran's foreign minister talked up the prospects of its survival on Sunday while visiting China, another of the signatories.

"We hope that with this visit to China and other countries we will be able to construct a clear future design for the comprehensive agreement," Mohammad Javad Zarif told reporters after talks in Beijing with his Chinese counterpart Wang Yi.

Zarif will later fly to Moscow and Brussels. Tehran's chief diplomat embarked on the tour as regional tensions spiked just days after unprecedented Israeli strikes in Syria which a monitor said killed at least 11 Iranian pro-regime fighters, triggering fears of a broader conflict between the two arch-enemies.

Iranian hardliners -- who have long opposed President Hassan Rouhani's moves to improve ties with the West -- are already mobilizing against the efforts to save the nuclear deal.

Mohammad Ali Jafari, head of the Revolutionary Guards, said the country could not rely on the West.

"We hope recent events will lead us not to trust in the West and even Europeans," he said Sunday, according to the conservative-linked Fars news agency.

"The Europeans have repeated on several occasions that they will not be able to resist US sanctions."

General » Be a reporter: Write and send your article » Subscribe for news alert
Tags: Iran, nuclear, diplomacy, US