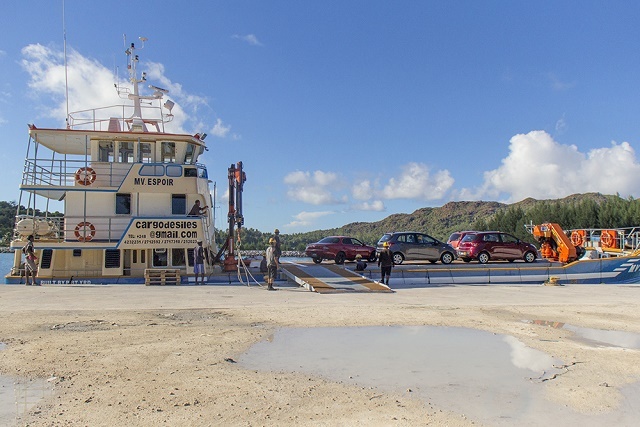 (Seychelles News Agency) - Praslin customers say that they are pleased and satisfied with the cargo service offered by an all-Seychellois built vessel, owned and managed by Gerard Rose.

Called MV Espoir, the cargo boat operates between the two main islands – Mahe and Praslin — of the 115-island archipelago in the western Indian Ocean.

“Since this vessel launched early this year, the service has been extremely good. You get your cargo on time and it comes in a container, therefore, it is safe from the elements,” said Jussa Laval, a regular customer of Rose.

Laval explained that before MV Espoir, cargos were at the mercy of the weather and at times parcels and cargos arrived drenched in rain. He said that today this has “improved greatly and the service is fantastic.”

Commenting on the price, another customer, Winesel Hetimier, said that the service is reasonable priced and affordable.

“I particularly like that payment can be made at the jetty and that they can alternatively provide you with a bill which you can settle later,” said Hetimier.

MV Espoir makes daily trips between the two islands from Monday to Friday, leaving Praslin at 3 a.m. and returning at 4 p.m. The boat is 75 percent full on most days.

The boat owner, Rose said that he chose the name ‘Espoir’ as it is the French equivalent of the word ‘hope’. He had hope that his dream to build a vessel from scratch would materialise one day.

“I have been building this boat for 15 years, and there was a period when I had to stop due to lack of foreign exchange on the market and this affected the progress as all of the material used in the building of the boat was imported,” said Rose.

He explained that it was only after the economic reform of 2008 that work on the vessel started again. Foreign help was only needed to do the finishing on the boat.

“I was never discouraged and wanted to see this idea and dream through, even if we have faced a lot of problems and difficulty,” he added.

MV Espoir has been entirely designed and engineered by Rose himself despite having no university degree in the said fields. Having been involved in cargo transportation for over 40 years, since the age of 14, Rose has seen the strengths and weaknesses of the vessels he and his father used. It was these strengths and weaknesses that pushed him to design his own vessel.

He switched from wood to fibreglass as he said that the former required a lot of maintenance. Then there was the question of space – his previous vessel, a schooner, could carry up to 40 tonnes of cargo per day. MV Espoir has the capacity to carry 275 tonnes.

Rose also relooked at the way that vehicles are loaded and unloaded on the boat especially for vehicles.

“Before we would use two pieces of wood to roll the car over and three-quarters of the time, the cars got damaged. With the way I've designed it now, you just drive on and off the boat,” said Rose.

Talking about future plans he outlined that he aims at building another boat to assist MV Espoir but this time around, a hull will be imported, as it takes too long to build one.

“I will then modify it according to my liking. This is a target that I would like to meet soon. I would like to also strengthen ground operations with more machinery and manpower,” he said.

At the moment there are ten people working on board MV Espoir – five Indonesians and five Seychellois, including his son and himself. Though he wishes to employ only locals, Rose said that this is a challenge as the some of the working force is being affected by drug and alcohol abuse.

Emirates Group hotel development at Cap Ternay will not go ahead, says Seychelles President in State of the Nation address