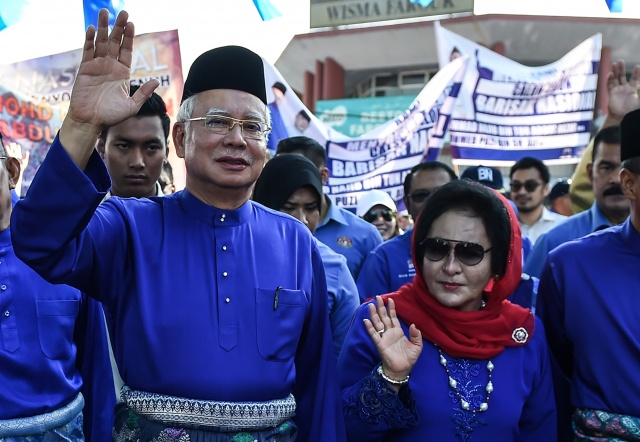 (FILES) In this file photo taken on April 28, 2018, Malaysia's then-Prime Minister Najib Razak (L) and his wife Rosmah Mansor (R) wave as they arrive at the nomination centre to hand over election documents in Pekan. Malaysia's scandal-hit former prime minister Najib Razak and his wife Rosmah Mansor were on May 12, 2018 banned from leaving the country, the immigration chief said, after the shock election loss of Najib's coalition. (Mohd RASFAN / AFP)

(AFP) - Malaysia's toppled leader Najib Razak was Monday accused by a former top graft fighter of blocking probes into a massive financial scandal, as the country's new prime minister got down to work after a historic poll win.

Voters turned out en masse to oust Najib after he was accused of involvement in plundering huge sums from Malaysian sovereign fund 1MDB in a sophisticated fraud that is now being investigated in several countries.

The 92-year-old Mahathir -- who ruled with an iron fist for two decades and came out of retirement to take on Najib -- is now the world's oldest elected leader.

Abdul Razak Idris -- former intelligence and investigations director of the Malaysian Anti-Corruption Commission -- lodged reports with the body alleging Najib tried to stop the probe into losses at 1MDB.

The US State Department alleges that at least $4.5 billion dollars was looted from the fund, and funnelled to the United States where it was used to buy everything from artwork to high-end real estate and a luxury yacht.

Both Najib and 1MDB deny any wrongdoing and he was cleared by domestic investigations.

The deputy chief commissioner of the anti-graft body, Azam Baki, confirmed to AFP that Abdul Razak had submitted complaints.

A copy of the complaints, seen by AFP, said that Najib was suspected on his own, or with the help of civil servants, of having tried to stop the 1MBD investigations.

He was also accused of halting a probe into a retirement fund.

"The reason I am lodging the reports today is so that the MACC can take swift action," he was cited as saying by The Star newspaper.

He said some people were worried about him taking the "bold" step but added: "I'm already 69 years old. If I die, I die for the country."

During Najib's increasingly authoritarian rule, the anti-graft agency had targeted some of his most vocal critics.

Earlier, Mahathir arrived at his office in the administrative capital Putrayaja to officially get down to work, and held meetings with senior civil servants.

The Sultan of Brunei also visited the new premier.

Markets opened Monday for the first time since last week's polls but did not fall as heavily as had been anticipated after Mahathir sought in a weekend speech to calm investors.

Stocks initially lost 2.7 percent but quickly won back ground and were 0.4 percent higher in early afternoon trade. Local currency the ringgit was also up slightly after earlier losing ground.

But it has not been all smooth sailing since the historic win, with concerns over the slow formation of the cabinet as different parties in the winning alliance jostle for positions.

Mahathir appointed three ministers at the weekend despite previously having said he would name 10 cabinet members.

Jailed politician Anwar Ibrahim, Mahathir's nemesis-turned-ally, issued a statement Sunday insisting his People's Justice Party (PKR) still supported the new premier after a senior figure from his party said the cabinet appointments were made without their consultation.

Anwar, in jail on sodomy charges his supporters say are trumped up, is expected to be freed on Tuesday.

Mahathir also faced criticism for saying that a controversial law passed before the election that punishes "fake news" with up to six years in jail would be reviewed rather than revoked.

He announced Sunday that it would be given a clear definition but that there was a "limit" to press freedom, despite having pledged during the election campaign to abolish it.

At the weekend, Mahathir slapped Najib and his unpopular wife Rosmah Mansor with a travel ban as speculation mounted they were about to flee the country.

-- Bloomberg News contributed to this report --