In Gaza, a day of blood and sorrow overshadows US embassy move 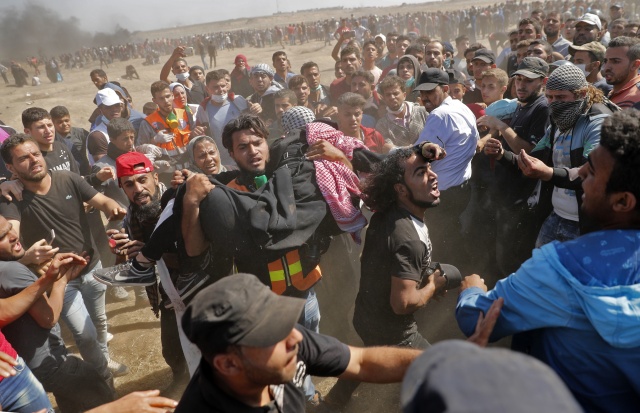 Palestinians carry a demonstrator injured during clashes with Israeli forces near the border between the Gaza strip and Israel east of Gaza City on May 14, 2018, as Palestinians protest over the inauguration of the US embassy following its controversial move to Jerusalem. Dozens of Palestinians were killed by Israeli fire Monday as tens of thousands protested and clashes erupted along the Gaza border against the US transfer of its embassy to Jerusalem, after months of global outcry, Palestinian anger and exuberant praise from Israelis over President Donald Trump's decision tossing aside decades of precedent. (Thomas COEX / AFP)

(AFP) - At Gaza's Shifa Hospital, people search desperately for loved ones. Some already know they are dead and grimly work their way through bodies.

Others have received no news so scour the wards, before descending to the morgue.

There a young man cries "Why are you leaving me alone?" as the body of his older brother lies on a stretcher.

But his mourning is cut short by the voice of a mortuary attendant calling to a colleague to move the corpse.

"Put him in the fridge quickly, another one has arrived," he said.

The dead man was one of at least 55 Palestinians killed by Israeli fire on the Gaza border Monday as mass protests broke out against the controversial US embassy move.

It was the deadliest day in the conflict since a 2014 war between Israel and the Palestinian enclave's Islamist rulers Hamas.

In Shifa the situation is critical.

Even before the day’s carnage, medical centres were running desperately low on vital medicines after seven weeks of bloody protests that have left 109 Palestinians killed. No Israelis have died.

The Gaza Ministry of Health called for citizens to donate blood as supplies were running low.

Israel accuses Hamas of being behind the protests and says it is merely defending its territory.

Whether the bloodshed achieved the protesters’ goals is unclear.

The stated aim - to break the fence and enter Israel - wasn’t achieved.

Palestinians were calling to be allowed to return to the homes their families fled from in 1948.

Using clouds of smoke from burning tyres to mask their approach, they hurled stones and some fire bombs toward the border.

For hours groups of young Palestinian men tried without success to prise apart part of a barbed wire fence on their side of the border, which bars the way to a more robust barrier closer to Israeli troops.

Despite the numbers falling around them, the protesters kept approaching the fence.

"We will continue to try to breach the border," said 20 year old Rabia al-Khawaja.

The wider goals of the protest, to focus attention on the suffering of the two million residents of Gaza and the Palestinian rejection of the embassy move, were achieved.

South Africa recalled its ambassador from Israel in protest, while Kuwait requested an emergency meeting of the UN Security Council for Tuesday and condemned the bloodshed.

Inside Shifa Hospital, such is the shortage of beds that Mohammed Mekdad is being treated in a makeshift tent outside the emergency room.

He was shot in both legs and they are wrapped in a light gauze that barely stems the bleeding.

Passed a mobile phone, he sobs to his family: "I am in Shifa, come quickly."

On the side of the tent a woman and her daughter stand with tears filling their eyes.

"They told me my son was injured in the leg. I didn't find him here, he may have been killed and they didn’t tell me," the mother said.

As the afternoon wore on, ambulances brought more wounded to the tent, with doctors admitting they were sending people home for lack of space.

As sunset approached, loudspeakers called on people to withdraw from the border zone amid rumours of plans for Israeli shelling and soon the protests drew to an end.

"We retreated in the evening after seeing planes and tanks (preparing to) bombard us," Khawaja said.

Looking at the border after the bloodiest day in the conflict in years, Umm Jameel said one of her sons had been injured in the leg.

Would she come back tomorrow?