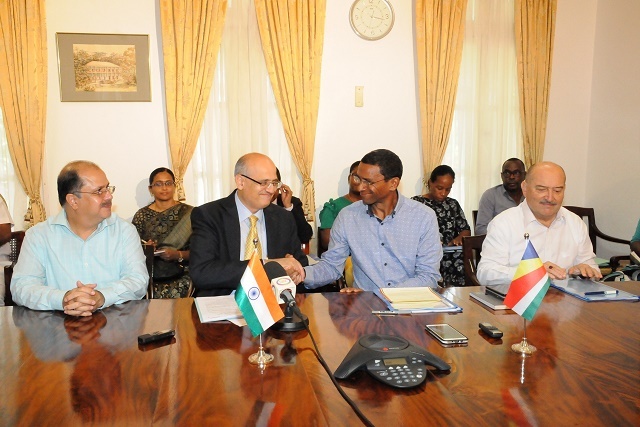 Speaking at the opening of the meeting in Seychelles on Tuesday, Seychelles’ Secretary of State for Foreign Affairs, Barry Faure, said that the meeting is a vital exercise as it builds a forward-looking pathway for engagement between both governments.

Faure said that the previous meeting, which was held in May 2013 in New Delhi, generated a number of collaborations with many sectors in Seychelles.

“From visits through exchanges of experiences and signing of instruments to training courses, the two sides have been able to connect and support each other’s growth over the last four years,” he said.

The secretary of state of Foreign Affairs added that the cooperation between India and Seychelles is in various fields such as maritime security, military, infrastructures and development, health capacity building, science and technology and many more.

“As we speak, 17 Seychellois students are on long-term training in India. Furthermore, 45 slots have been made available to Seychelles for ITEC courses,” said Faure.

Recently, the Indian government announced that they will be giving financial support to five civilian projects in Seychelles amounting to $8.36 million.

The secretary of state of India, Vijay Gokhale, said Seychelles and India are two democracies which had historically enjoyed a very close relationship.

Seychelles, a group of 115 islands in the western Indian Ocean, and India established diplomatic relations on June 29, 1976.

Since then, the partnership between the two countries has been regularised under the framework of the Joint Commission.

However, a 20-year-agreement signed earlier this year for the Indian government to use one of the Seychelles’ islands -- Assumption -- as a military base has aroused much controversy. The government of Seychelles supports the plan but the opposition members in the National Assembly and many private citizens are against it.

“Both our countries have a unique strategic convergence. We share the same geo-strategic vision of maintaining peace, security and stability in the Indian Ocean. India put paramount importance in consolidating bilateral ties with our maritime neighbours in the Indian Ocean,” said Gokhale.

He added that “the government of India is also committed to assisting the government of Seychelles in any way it can for the advance of our bilateral cooperation. In that context we are looking forward to the first state visit of President Danny Faure to Delhi,” He added.

Diplomacy » Be a reporter: Write and send your article » Subscribe for news alert
Tags: Joint Commission Meeting, Secretary of State