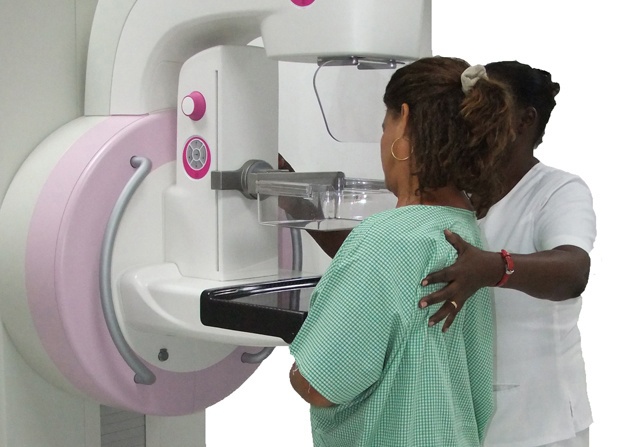 File photo: Patient undergoing a mammogram at the Seychelles Hospital (Seychelles News Agency) The goal of mammography is the early detection of breast cancer which is amongst the most common types of cancer worldwide including in Seychelles

(Seychelles News Agency) - In 2012, 8.2 million people worldwide died as a result of cancer which is considered by the World Health Organization (WHO) to be a leading cause of death globally.

The most common causes of cancer death according to WHO, are cancers of the lung, liver, stomach, colorectal and breast cancers.

Amid indications that cancer is on the rise both locally and globally, a top oncologist from India, was introduced to members of the Seychelles Cancer Concern Association (CCA) at its mid-year meeting yesterday.

Dr Raja Sundaram, Director of Oncology Services at the SRM Institute for Medical Science, (SIMS) in Chennai, India, is on an introductory visit to the Seychelles organised by local practitioner Dr Murthy Pillay.

Dr Sundaram told an attentive audience comprising of people who are concerned about the disease, those who have been through it or have family members or friends who have been affected by cancer that SIMS is "passionate about cancer cure".

Dr Sundaram said that in most instances, modern state of the art technology at the hospital makes it possible for surgery to be very focussed on the cancerous cells.

For instance he said, it is no longer necessary to remove a woman's entire breast, but just the part that is diseased.

Stressing the importance of early screening, Dr Sundaram said that men should undergo PSA (prostate Specific Antigen) tests at least once yearly. The tests measure the level of antigens, a protein produced by the prostate gland. A high PSA level is an indication of cancerous processes.

Likewise, women, upon becoming sexually active, should also have regular pap smear testing. This is a method of cervical screening to detect pre-cancerous and cancerous processes in the endocervical canal (transformation zone) of the female reproductive system.

Dr Sundaram explained that the SRM Institute for Medical Science, (SIMS) a 300 bed hospital, which also has other units, such as Orthopaedic and Cardiac is on average 30 percent cheaper than most large medical institutions in Chennai, mainly because it is "not commercially oriented."

That is presumably because SIM Institute is part of a larger business group, which is also involved in other economic activities, such as real estate and construction.

"We are very affordable and care for patients who cannot afford to pay the full costs. They will be treated with the same technology and same doctors, though maybe not benefiting from the same level of accommodation."

The members of CCA had many questions including on the possibility for Seychellois patients to be treated at his hospital in India.

Responding to the queries Dr Sundaram who in the past has treated Seychellois cancer patients sent to India for specialized cancer treatment said patients from Seychelles and elsewhere are welcome, though charges are higher for non-Indians because of government tax regulations.

The visiting oncologist is a strong believer in good dieting, insisting that the best foods are organically grown vegetables and fruits. While counselling against meats and meat fat, he said that fish and most seafood are excellent.

"Everyone should also avoid smoking and drinking alcohol as another effective way of avoiding cancer," he noted.

The Indian oncologist is expected to be coming to Seychelles at quarterly intervals following this first visit.

Saturday's mid-year meeting of the Cancer Concern Association was one which attracted a bit more members than past meetings.

It was an opportunity for members to take stock of what has been achieved during the first half of this year and to be briefed on work that the association is doing in its efforts to support those who suffer from cancer together with their relatives and loved ones as well as to create awareness and sensitise people on the disease.

Since the beginning of the year several activities have been organised from a candle light march on February 4 to commemorate World Cancer Day to a "Cancer Blitz" in the capital of Victoria the same month with free screenings, distribution of leaflets and sale of items as part of a cancer information campaign.

CCA’s outreach programmes have now also been extended to the Seychelles second and third most populated islands of Praslin and La Digue.

In its efforts to raise funds, CCA’s Chairperson, retired Anglican Bishop French Chang Him also announced amongst others, a fundraising "Hope Concert" later this month as well as a “Pink Ball” in October to commemorate the Association's 15th anniversary.

Tiny Seychelles, an archipelago of 115 islands with a population of around 90, 000 people have not been spared from cancer.

According to the senior Registrar for Surgery at the Seychelles hospital, Dr Henry Telemaque, the island nation recorded 114 cancer patients last year.

Statistics from the archipelago’s Health Ministry shows cancer presently accounts for 16 percent of deaths yearly and the most common types are those of the colon, breast in women and prostate in men.