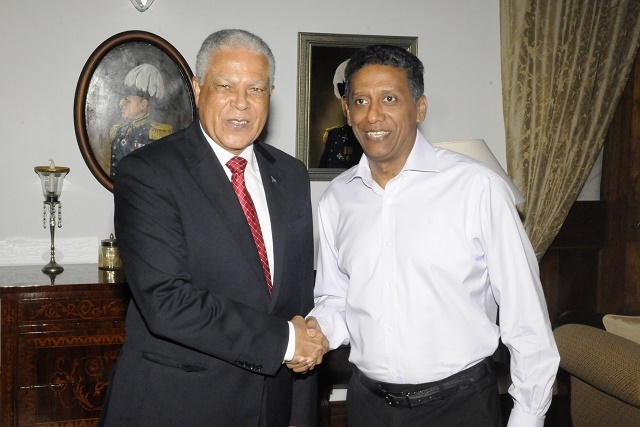 In his meeting with the President, Gonçalves said that he sees both countries also intensifying their collaboration and agreements signed in the past. (Louis Toussaint)

José Da Silva Gonçalves, who is also the minister of transport, met with the Seychelles’ President Danny Faure at State House in the capital, Victoria.

Gonçalves said that Seychelles has a strong tourism strategy that is very similar to what Cape Verde is aiming for.

“In that case, I am looking forward to having some Cape Verdean student to come and study at the Seychelles Tourism Academy so that in return we can get more professionals,” said the Cape Verdean minister.

The head of state of Seychelles, a group of 115 islands in the western Indian Ocean, and the Cape Verdean minister also discussed good governance and leadership.

“We spoke on the importance of clear leadership in terms of how to responsibly manage this paradise that God has given the Seychellois people. Indeed, it could not have been put into better hands,” said Gonçalves.

Talking about the commonalities between both countries, especially the Creole culture, Gonçalves said that: “We Creole people have a way of looking at the world and we love to keep our tradition alive.”

Looking ahead, Gonçalves said that he sees both countries also intensifying their collaboration and agreements signed in the past. In June 2014, the President of Cape Verde, Jorge Carlos Fonseca made a state visit to Seychelles. During his visit, Fonseca signed several agreements in the field of politics, economics as well as an air service agreement.

The Seychelles’ Minister of Tourism, Didier Dogley, who was also present at the discussion, said that Cape Verde has an all-inclusive tourism model whereby visitors pay everything from where they are coming from.

Dogley said that this is not necessarily good as it does not bring much revenue for the country as the foreign exchange stays in the country where the visitor is paying for the booking and accommodation.

“We want to work with Cape Verde to change this model so that they can bring in more revenue into their country,” said Dogley.