AU upbeat deal will be found to end Madagascar crisis 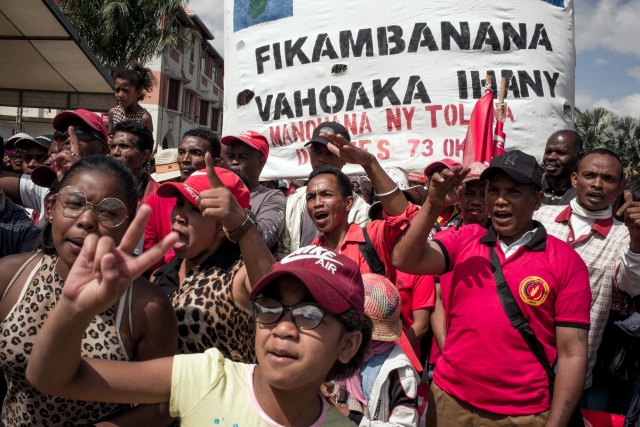 Protesters hold banners, gesture and chant slogans as they take part in the traditional may day demonstration called by opposition deputies, and workers' unions, on May 1, 2018, in Antananarivo. (RIJASOLO / AFP)

(AFP) - The African Union is optimistic a deal will be struck in Madagascar to end the crisis that has shaken the Indian Ocean island where the president has faced street protests demanding his resignation.

Madagascar has been rocked for three weeks by violent and deadly opposition protests following the introduction of controversial electoral laws that would have prevented opposition candidates from participating in elections expected later this year.

The country's top court last week threw out as unconstitutional the contentious sections of the legislation and on Friday, President Hery Rajaonarimampianina approved the changes to the law as ordered.

The African Union, the UN and regional bloc Southern African Development Community have dispatched mediation envoys to Madagascar to try to defuse the crisis.

"In the wake of all these efforts,...the international community emissaries were able to get the main (Madagascan) parties to open high level political consultations to reconcile their points of view," according to an AU statement released Friday night.

This should lead to a "draft political agreement to allow a calm and orderly evolution towards the holding of presidential election on a date provided for by the constitution," said the AU.

Since April 21, hundreds of opposition supporters have occupied the May 13 Square in the heart of the capital Antananarivo, demanding the resignation of the president ahead of general elections seven months away.