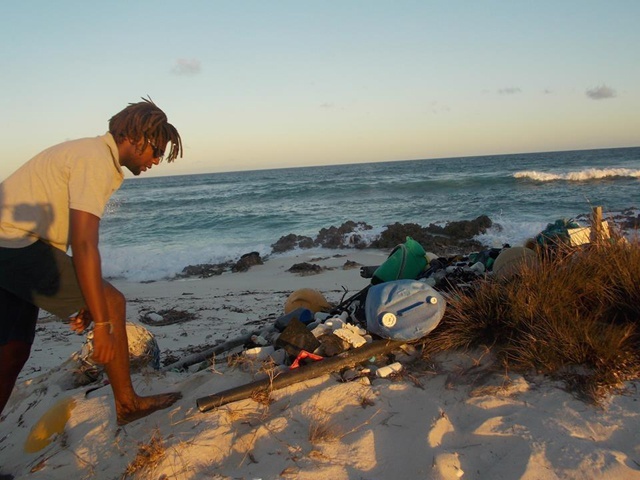 The team on Aldabra works to remove as much waste as possible but it is no match for the great amount of trash washing to shore. (Sheril Decommarmond, SIF)

(Seychelles News Agency) - Six lucky Seychellois will have the chance to visit the exotic and hard-to-reach Aldabra now that the Seychelles Islands Foundation (SIF) has launched a video competition to find volunteers to help clean up the atoll.

Aldabra -- one of the world’s largest atolls -- is a UNESCO World Heritage Site in Seychelles, a group of islands in the western Indian Ocean. It is home to a population of endemic giant Aldabra tortoises.

According to findings on Plastic Oceans, over eight million tonnes of plastic enter the ocean every year. These plastics along with other rubbishes are carried long distances by ocean current and many end up on the shores of faraway destinations.

The team on Aldabra works to remove as much waste as possible but with between 10 and 16 people managing the atoll, the team is no match for the great amount of trash washing to shore. It is for this reason that the foundation is looking for locals to join the project that has been dubbed ‘Aldabra Clean-Up Project’.

Very few Seychellois get the chance to set foot on Aldabra, which is a platform for scientific research, with long-term monitoring and projects being conducted year round.

The remote Aldabra atoll is over 1,000 km southwest of the main island of Mahe and can only be reached by boat.

The lucky six Seychellois will be joined by six international volunteers from the University of Oxford in the United Kingdom as well as staff from the foundation.

Together the team will spend five weeks cleaning up the islands that form part of the atoll. The event will take place between February and March next year.

Interested candidates can apply by sending a five-minute video to the foundation before May 27. The Aldabra Clean-Up Project officer, Jeremy Raguain, said that the video does not have to be professionally done; it just has to show why the applicant is the best candidate for this project.

“The video can include ideas that can be implemented before, during and after the clean-up that will help us solve this problem. We want to find how many good ideas are out there,” said Raguain.

The applicant has to be 18 years or above and physically fit. The officer explained that this is a must as volunteers will be spending long hours on the field in the sun picking up trash which at times can be big in size.

“Aldabra is also far away from any medical centre and having somebody in good health and fitness means that we can avoid any emergency situations,” said Raguain.

It is not necessary for the volunteers to have a background or career in environment or conservation sector, “but rather a passion for being involved in something that will help change our world for the better and a belief that they can make a difference,” a press release from the foundation stated.

The winners will be announced on June 5, World Environment Day.  During the period of announcement and departure to Aldabra, the team will carry out awareness and fundraising activities, both in Seychelles and UK.

Money collected during the fundraising activities will be used to finance the project. A cargo vessel will be chartered to Aldabra to gather as much plastic and other marine waste that will be brought back to Mahe to be processed.