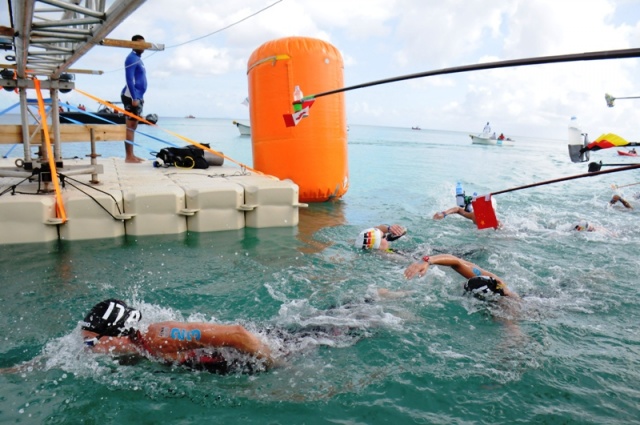 The event which was the second one in the series took place at the well-known beach of Beau Vallon. (Joena Meme)

(Seychelles News Agency) - Two Italians swimmers won the 10 km events for men and women in the open water swim World Series hosted for the first time at the Beau Vallon beach in Seychelles on Saturday and Sunday.

On the men’s side her compatriot Simone Ruffini, who is the defending champion, won the race in 1 hour, 49 minutes and 41 seconds.

At the end of her race, Bridi told the press that the “race was very hard because of the hot weather.”

“I tried to increase the speed of the race halfway through and tried to stay in the first position until the end.”

On his side, the winner of the men’s event, Ruffini, said that the heat worked to his advantage and that “after my first win, I think I can go on to win the FINA open competition because last year I won three series.”

The event which was the second one in the series took place at the well-known beach of Beau Vallon in the northern side of the main island of Mahe.

Altogether 26 swimmers started the race including two Seychellois — Damien Payet who came out 23rd, and his brother Bertrand Payet in 24th place.

The vice-president of the International Swimming Federation, Stephane Cassidy, was happy with the organisation of the event in Seychelles.

“Seychelles did a great job, it was a challenge with the heavy rains on Friday, but the officials said let’s get to work. I was very impressed,” said Cassidy.

A mass event scheduled for Saturday had to be cancelled because of the bad weather.

Cassidy said that this has been an exciting go at what he hopes will be many years of a continuous relationship.

Seychelles will be hosting the FINA/HOSA swimming World Series for four consecutive years.

The open water swimming competition is a series of 10 km races in outdoor water bodies like oceans and lakes held annually since 2007. Points are awarded for each race in the series, with the points being added together for an overall winner.

The annual series annually is organised in over 9 locations and takes places in either freshwater or sea. The event prize money is $30,000 while the overall prize is $ 250,000.

The third event in the series will take place in Setubal, Portugal on June 9.