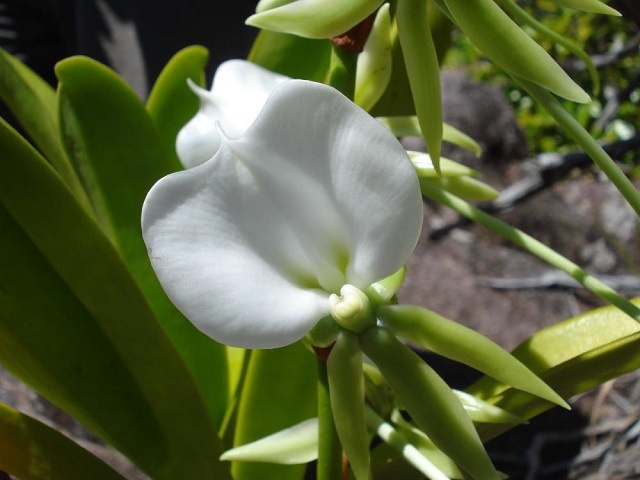 The orchid which is the national flower can be seen on the planes of the national airline – Air Seychelles. (Seychelles Plant Gallery)

(Seychelles News Agency) - The Seychelles’ tropicbird orchid locally known as orkid payanke featured on the new Duchess of Sussex wedding veil. The veil and wedding gown worn by Meghan Markle for her wedding to Prince Harry was designed by Clare Waight Keller of Givenchy, a French luxury fashion house.

The 15-foot silk tulle veil incorporated embroidered flowers from each of the 53 member states which form the Commonwealth, which Queen Elizabeth heads.

The tropicbird orchid is not endemic to the island nation. Raymond Brioche from the National Botanical Gardens Foundation told SNA on Tuesday that the flower should be protected as it is the national flower of Seychelles – a group of islands in the Indian Ocean.

“It is important for people to know that natives must be given the same importance as we give to the endemics, as they have been on our islands for many, many years, which makes it ours. The orchid, although it can be found in Madagascar, Comoros and other Mascarene islands must be protected,” said Brioche.

The national flower can be seen on the planes of the national airline – Air Seychelles. Brioche said that nowadays the orchid cannot be found easily. "It is rare as people have in the past collected the orchid from its natural habitat and tried to grow the same at their residences, but sadly these plants could not adapt and died, contributing to its rarity.”

The tropicbird orchid or Angraecum eburneum is a species of orchid. Their common name is the "comet orchid". They generally grow up to 2 metres in height and grow 10 to 15 flowers per plant. Apart from the Indian Ocean islands, the orchid can also be found in Kenya and Tanzania.

The wedding of Meghan to Prince Henry, Duke of Sussex, commonly known as Prince Harry, a member of the British royal family, on Saturday was an event watched by millions all over the world.

Daniella Marie was one Seychellois who was enthralled by the ceremony held at St George's Chapel, Windsor Castle, in the United Kingdom. Marie said that this wedding has made history for Seychelles. “In the sense that this has never been done before by a member of the royal family,” explained Marie making reference to the orkid payanke being embroidered on the Duchess of York’s veil.

“Seychelles will always be in the limelight when people – down memory lane - will talk about the event. And for the generation to come this is something they will read about and feel connected to.”

Lionel Bick, a cabin crew member from Air Seychelles, said that “as a Seychellois, I am very proud. For Seychelles will forever be linked to the Royal family. Also when Prince William – Prince Harry’s older brother married, he and his new wife came to our own North Island for their honeymoon.”

The veil also included two other flowers - the Wintersweet, which grows in front of Nottingham Cottage at Kensington Palace, and the State flower of California, the California Poppy.

The Duchess of Sussex - Rachel Meghan Markle - is an American former actress, born and raised in Los Angeles, California. Prince Harry is the younger son of Charles, Prince of Wales, and the late Diana, Princess of Wales, and is sixth in the line of succession to the British throne.