Plans to improve quality of journalism, as Seychelles gets new media association 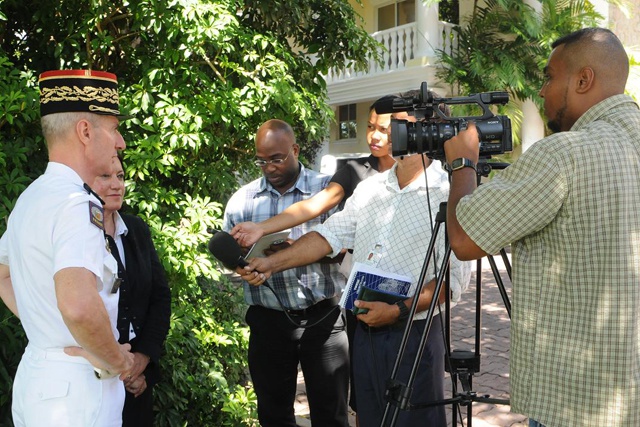 General Jean François Hogard, commander of the French forces in the southern zone of the Indian Ocean being interviewed by Seychellois journalists during a recent visit to Seychelles. (Louis Toussaint,Seychelles News Agency)  AMPS is open to all who work in the journalism profession, from the journalists and producers to the photographers and cameramen.

(Seychelles News Agency) - A new body ‘Association of Media Practitioners Seychelles’ (AMPS) have been set up in a bid for Seychellois working in the journalism sector to have an active organization which represents them and their interests.

Representatives from different media houses operating in the country met at Cable and Wireless’ Exiles Club in the capital of Victoria yesterday to approve the draft Constitution of the association and elect its first executive committee.

Speaking after the election Gervais Henrie said that Seychelles media has operated in a vacuum for much too long with each practitioner bound only to the organization he or she is employed with.

“We needed something which unifies us, which represents us as a collective group. Through this association we can explore ways to better understand the environment we work in, establish relations with other likeminded bodies in the region and internationally, address those issues which hinder our progress, so that ultimately we improve on the quality of the service we deliver,” Henrie said.

The AMPS is open to all who work in the journalism profession, from the journalists and producers to the photographers and cameramen.  Among the activities which the Committee has already earmarked, are training sessions on topics such as the laws which govern the media locally and human rights and democracy in relations to the media, amongst others.

Henrie said that the association will also look into the possibility of undertaking a survey on the media here in Seychelles.

It is not the first attempt to have an active body representing media practitioners in Seychelles.

A first meeting last month decided to do away with the old association altogether and start afresh.

“I hope that this time around we will all pitch in and make this association work for us. Like other professionals we need an organization which speaks on our behalf and we are best suited to represent ourselves. This way we can engage with government and other partners in matters which concern our profession. However whether this association fails or makes it will depend entirely on the willingness and commitment of its members to make it work. It is really up to us,” he concluded.

At the end of a working visit in Seychelles last month Reporters Without Borders’ Director for the Africa desk, Cléa Khan Sriber encouraged the creation of an organization for local media practitioners which she said would give them a voice and add value to their work.

She affirmed that the international media watchdog organization “is willing to assist in providing examples of best practices of such associations and how to get started.”

Seychelles, which has a population of 90,000, has two daily newspapers, 1 tri-weekly and 3 weeklies, 3 radio stations including the island’s first privately-owned radio station, 1 national television station and a recently launched news agency.