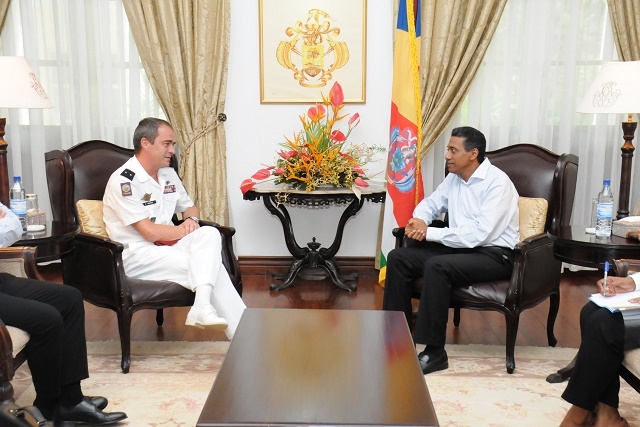 The discussion also touched on establishing a centre for coordination and surveillance of marine activities. (Jude Morel)

(Seychelles News Agency) - France and Seychelles are seeking to redevelop and renew military cooperation, the French commander of the armed forces of the South Indian Ocean Zone (FAZSOI) said Tuesday after meeting with President Danny Faure at State House.

Eric Vidaud, who is on a four-day visit in the 115-island archipelago, said that discussions included the social ills affecting the Indian Ocean region and how France can offer its expertise.

“I am thinking of drug trafficking and illegal fishing that is common for all islands in the region. We are working with the authorities to develop mutual training to protect the borders from these activities,” said Vidaud.

The commander said that the region is more efficient when all countries work together.

“This is why I have come to Seychelles, which is a strategic point in the region, to discuss these issues with the president and authorities concerned,” he added.

The discussion also touched on establishing a centre for coordination and surveillance of marine activities.

“We want the centre to become operational as soon as possible. The centre will be able to designate a vessel in a shorter limit of time to counter any illegal activities in the Indian Ocean,” said Vidaud.

Also present at the meeting was the French ambassador to Seychelles, Lionel Majesté-Larrouy, who said that the visit is another opportunity for France and Seychelles to relook at their military cooperation.

“We have a lot of French citizens living in the Indian Ocean and therefore we need to exert the prerogative of the state to protect them,” said Majesté-Larrouy.

He added that France “has the capacity of a global power in that we are permanent members of the Security Council and this put us in an ideal position to protect the borders of the Indian Ocean.”

The armed forces of the South Indian Ocean Zone (FAZSOI) guarantee the protection of the national territory and animate regional cooperation from Reunion, a French overseas department, and Mayotte.

The forces are the main point of support in the Indian Ocean area to fight against regional threats, such as piracy or illegal immigration, to monitor the exclusive economic zones associated with all the islands in the area of responsibility.