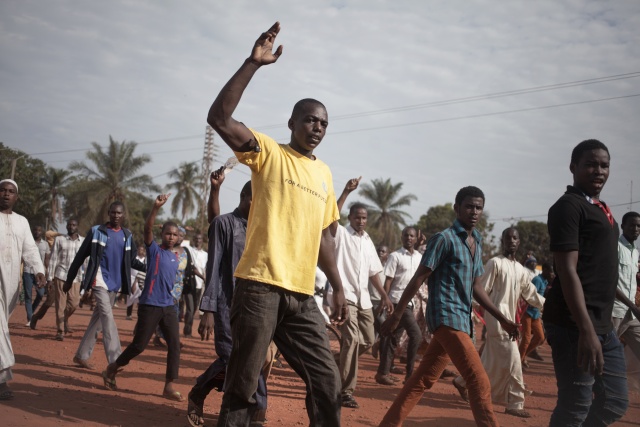 The inhabitants of the mainly Muslim PK5 neighbourhood demonstrate in front of the headquarters of MINUSCA, the UN peacekeeping mission in the Central Africa Republic, in Bangui, on April 11, 2018, where they deposited more than a dozen bodies of the victims of the clashes of April 10. A United Nations peacekeeper was killed and eight others wounded April 10 in clashes with armed groups in a restive neighbourhood of the capital of the Central African Republic, a security source said. Peacekeepers from the UN's Minusca force and Central African soldiers have since April 8 been locked in an operation to rout armed groups in Bangui's mainly Muslim PK5 neighbourhood. (FLORENT VERGNES / AFP)

(AFP) - Six months ago, the UN Security Council agreed to send an additional 900 troops to the Central African Republic (CAR), reinforcing one of its biggest peacekeeping missions in one of the world's most dangerous countries.

So far, just 400 have arrived -- a worrying sign of the problems that the UN mission, known by its French acronym MINUSCA, is having in coaxing countries into sending men to the flashpoint nation.

Brazil, Canada, Colombia, Ivory Coast and Uruguay are among the countries which were approached, but without success, a UN source said.

In the end, Nepal agreed to provide 600 troops and Rwanda the other 300, the source said, adding, "They should all be there before the mission's mandate is renewed" in December.

MINUSCA has been in CAR since April 2014, tasked with helping to stabilise the country after a brutal sectarian-tinged civil conflict that France helped to dampen. It currently has 11,000 troops and 2,000 police in a complement of nearly 13,500 people.

But commentators question whether the mission can achieve much, given the scale of CAR's problems. The country is in disarray and most of its territory remains in the hands of rival militias, many of them claiming to protect Christian or Muslim communities.

"Like many UN missions, MINUSCA presents several major weaknesses. Foremost, it is undersized and under-equipped. Up against the multiplication of 'hot spots', the mission is completely overwhelmed," the International Crisis Group (ICG) think tank said at the end of 2017.

Thierry Vircoulon, a specialist at the French Institute of International Relations (IFRI), is more blunt: "It's not just that nobody wants to go into the Central African quagmire -- it's that this quagmire is pointless."

Events in recent months have heavily underscored such grim assessments.

Bangui saw its bloodiest flare-up in two years on April 9-10, when 27 people were killed and more than 100 were wounded in clashes between peacekeeping troops and militias in a flashpoint Muslim enclave of the city.

Muslim residents accused UN soldiers of killing 17 men, while MINUSCA said the violence erupted with an ambush of its troops during a security sweep.

On May 1, religious-toned violence spread when armed men stormed a Christian church in the middle of a service, killing worshippers and a priest.

In response, a mob burned a mosque and lynched two people believed to be Muslim. Twenty-four people died and around 170 were injured.

Since its deployment, MINUSCA has lost 73 people, three of them since the start of the year.

Command and disciplinary problems within MINUSCA have added to the mission's woes. Accusations range from "passivity" in the face of attacks against civilians to sexual abuse and collusion with armed groups.

Almost a third of the allegations of sexual abuse reported in all 15 UN peacekeeping missions worldwide in 2017 concerned MINUSCA.

In March, Gabon decided to withdraw its 444 soldiers amid allegations of sexual abuse and inadequate equipment. Negotiations are in hand to persuade Gabon to keep these men on the ground. "Their departure planned for June has been postponed until September 30," a UN source said.

In 2016, 120 Republic of Congo troops were dismissed after accusations of sexual assault and various forms of illegal trafficking, and last year a battalion of more than 600 of their colleagues was sent home amid similar suspicions.

"The fundamental problem for the contingents of Blue Helmets (in the CAR) is not their quantity but their quality," argues Vircoulon.

The UN says it is responding to these problems.

In 2017, it opened internal inquiries into killings in incidents involving soldiers from the Moroccan, Rwandan and Mauritanian contingents, and appointed human-rights lawyer Jane Connors to vet allegations of sexual abuse.

"We have acknowledged the problem and now we are going to do our best, we are doing our best, to reply to this key issue," UN chief Antonio Guterres told AFP during a visit to Bangui, the CAR capital, last October.