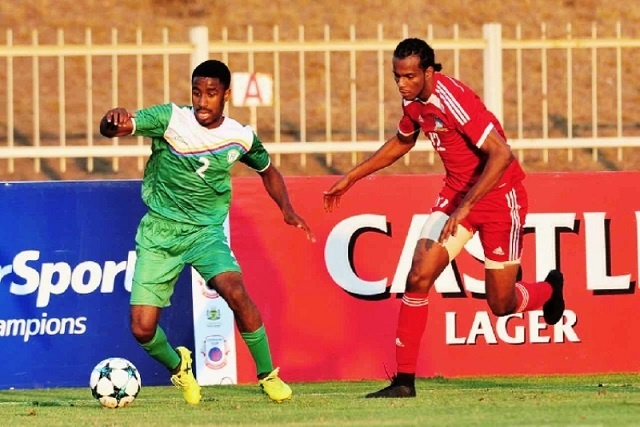 Action from the Seychelles match against Comoros which ended on a 1-1 draw on Sunday. (Seychelles Nation)

(Seychelles News Agency) - The Seychelles' men’s national team held Madagascar to a 1-1 draw on Tuesday in its second match of the Council of Southern Africa Football Associations (Cosafa) tournament in South Africa, setting up a must-win game with Mozambique in order to have a chance to advance to the next round.

Madagascar opened the score in the first half through Jaotombo Bourahimi and Seychelles drew level with a header from Eric Mellie. The score remained locked at 1-1 till the end of the match. It is Seychelles' second straight draw in the tournament.

“Seychelles used its strong point which is its defence system. In the first half we made only two shots on target while Madagascar was attacking all along and scored the opener while we used the opportunity from a corner kick to equalise,” said Mathiot.

“It was a fast-paced match and not easy for the Seychellois defenders but they did not lose their cool and were rewarded with a draw in the end. The match showed us that Seychelles has a good defence system and the coach is doing a good job of capitalising on it,” the analyst said.

Madagascar still lead Pool A after the draw with 4 points, the same as Mozambique after a 3-0 win over Comoros. Seychelles is third with 2 points after another draw 1-1 against Comoros in its first match on Sunday.

The team from Seychelles, an archipelago in the western Indian Ocean, will play its last match of the Pool on Thursday against Mozambique.

Mathiot said that after Seychelles first two matches “anything is possible in the match against Mozambique. A victory for us will give us a chance at making it to the quarterfinal depending on the result of Madagascar against Comoros.”

Both Madagascar and Mozambique will be looking for a win to decide which one ends at the top of the Pool. Winners of the Pool A and B will progress to the next stage of the tournament.

The group stage ends on June 1 and after the elimination of six teams, the top seeds which include Zimbabwe, Zambia, South Africa, Namibia, Lesotho and Swaziland, will come in for the quarter-final stage.

Sport » Be a reporter: Write and send your article » Subscribe for news alert
Tags: Council of Southern Africa Football Associations