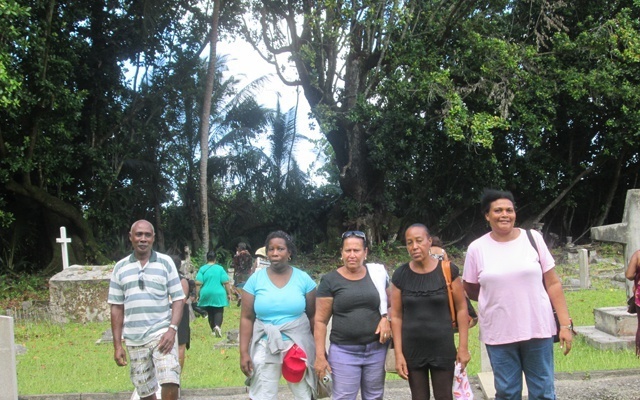 A group of original Chagossians from Seychelles who went on a trip organised and sponsored by the British government in 2015. (Alvin Tirant)

(Seychelles News Agency) - The Seychelles-based Chagossians are demanding that the British government appoint an institute specialising in needs and loss assessment for their displaced group.

Pierre Prosper, the chair of the Association of Chagossians in Seychelles, spoke to SNA on Monday as the group is again this year maintaining its stance and boycotting visits to their islands planned for later this year.

Prosper said that “any support package should be used for supporting the Chagossians and not for organising these visits.”

The chairperson said that while visits are important, the group feels that at this time the visits are not to the advantage of the islanders.

“We are happy that finally after all these years and after some of our people have passed on, we are getting a package, though the amount and disbursements policies are still under contention. We do not think that this money should be used to organise visits which costs a lot, in terms of flying everyone to Mauritius, then chartering planes and boats to the Chagos islands only for a few hours,” said Prosper.

“The British have not been able to define what “needs” mean? The support fund should be used for the Chagossians to better their lives. These people have a lot of challenges and we also want a better deal for the older generation who needs extra care,” explained Prosper.

Britain has set aside $44 million for the group

Prosper said his group believes the British government should offer more than $44 million for the entire group, a fair individual amount, and should consider each individual equally.

In a statement sent to SNA on Wednesday, the British High Commission said “the Foreign Commonwealth Office will continue to organise these popular visits, as they have in the past, and to engage with Chagossians to ensure that this programme will allow more Chagossians to visit in the coming years. These visits will allow Chagossians to maintain a connection to the islands.”

The statement added, “these visits are just one part of the support package, which also seeks to improve the livelihoods of Chagossians in the communities where they now live.”

But the local association feels that they should be consulted more.  “We will go back to the British High Commission with our comments and proposal for questions and format over the next weeks,” said Prosper.

“They should get our opinion on how the questionnaire for this survey will be administered. We do not want the way the questions are asked to give an under-representation of needs and expectations within our community. And we do not want the results to paint a false portrait of the Chagossians needs,” said Prosper.

The British statement explained that the “information gathered during the census will form part of a process to develop effective programmes, including visits, which will have the biggest impact on the lives of those who need it most.”

“We want them to consider our points as we want this to be as broad as possible and cover issues such as education package for the younger generation, health benefits, housing, loan, debts relief. Things that have real value to people,” said the chairperson.

Prosper said that the association would rather see money from the package being used to pay experts in needs and loss assessment to conduct the exercise locally. “We are asking the Seychelles government to support us on this request so that we can be fully involved in the survey. We also want the assessment to be independent of the British Government’s influence on the format and methodology,” said Prosper.

On the issue of the court case for resettlement, the association said that they have got new hearing dates for the second week of December.

“All that is needed in this saga is for the British to have a change of heart. They need to treat us fairly without discrimination. We feel that we are being discriminated against because of our colour and ethnicity. We hope to have our dignity back which they took over 50 years ago when we were forced to leave our homeland,” concluded Prosper.