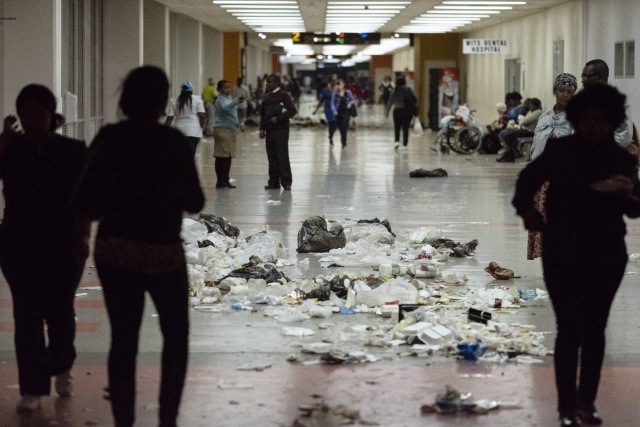 Patients walk through waste and garbage bags at the Charlotte Maxeke Hospital in Johannesburg, during a protest of the employees in May 31, 2018. One of South Africa's largest hospitals was barricaded and fires started by workers protesting pay and conditions on Thursday, creating chaos for patients and reportedly forcing the cancellation of operations. More than 100 support staff downed tools over the failure of Johannesburg's Charlotte Maxeke hospital, also known as Joburg General, to pay performance bonuses and overtime. (MARCO LONGARI / AFP)

Striking staff, who included nurses and porters, picketed inside the hospital building, up-ended bins and barricaded doors to prevent police from entering the site, an AFP correspondent saw.

Tshepo Mokheranyana, NEHAWU's regional leader, said his union was forced to take action after the government failed to intervene despite a rally at the Health Department in March.

"Employers must never take workers for granted because if workers have worked hard... they should be rewarded for that. No one should take that effort for granted," Mokheranyana told AFP.

The security presence did appear to be increased both inside and outside the hospital.

The facility has an accident and emergency department and more than 1,000 beds, serving the city of Johannesburg and surrounding areas.

"We have not been paid our bonuses for two years," said a protesting worker who declined to be named.

But not all hospital staff supported the day of action.

"They have intimidated other colleagues in other parts of the hospital, now we are also scared of being" attacked, said one worker as she left the hospital.

Health Minister Aaron Motsoaledi condemned the action of the workers.

"I regard this act not as an act of labour, but an act of true hooliganism," he told reporters, "just sheer acts of hooliganism, where people have just gone mad against their fellow human beings".

The union will meet hospital management and government officials on Friday in an effort to resolve the crisis.