No need for chemo in many breast and lung cancers, major studies show 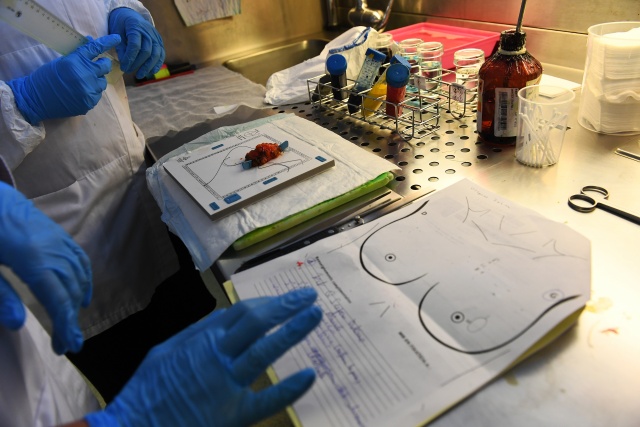 In this photograph taken on October 9, 2017, pathologist Maria Paciencia-Gros prepares to study a tumor present in the tissues of a breast fragment, during a macroscopic analysis of breast cancer, in the laboratory of pathological anatomy of the Paoli-Calmette Institute (IPC) in Marseille. (ANNE-CHRISTINE POUJOULAT / AFP)

(AFP) - Two major studies released Sunday show that many people with breast and lung cancers may forgo chemotherapy and still live longer, signaling a waning need for what was long seen as the standard of cancer care.

The findings were released at the American Society of Clinical Oncology (ASCO) meeting in Chicago, the world's largest annual cancer conference.

The first study, described as the largest breast cancer treatment trial to date, found that the majority of women with a common form of breast cancer may be able to skip chemotherapy and its toxic, and often debilitating, side effects after surgery depending on their score on a genetic test.

As many as 65,000 women in the United States alone could be affected by the findings.

Until now, women have faced considerable uncertainty about whether to add chemo to hormone therapy after a diagnosis with hormone-receptor positive, HER-2 negative breast cancer when found at an early stage, before it has spread to the lymph nodes.

"With results of this groundbreaking study, we now can safely avoid chemotherapy in about 70 percent of patients who are diagnosed with the most common form of breast cancer," said co-author Kathy Albain, an oncologist at Loyola Medicine in a Chicago suburb.

A 21-gene test called Oncotype DX, available since 2004, has helped guide some decisions on proper care after surgery.

A high recurrence score, above 25, means chemo is advised to ward off a recurrence, while a low score, below 10, means it is not.

The current study focused on those whose scores were in the middle range, from 11 to 25.

Researchers studied their outcomes, including whether or not cancer recurred, and their overall survival.

"For the entire study population with gene test scores between 11 and 25 -- and especially among women aged 50 to 75 -- there was no significant difference between the chemotherapy and no chemotherapy groups," said the findings, published in the New England Journal of Medicine.

The results show that all women over 50 with a recurrence score of 0 to 25 can be spared chemotherapy and its toxic side effects.

However, among younger women with scores 16 to 25, outcomes were slightly better in the chemotherapy group, so in those cases doctors may urge patients to consider a chemo regimen.

The results "should have a huge impact on doctors and patients," Albain said.

"We are de-escalating toxic therapy."

According to first author Joseph Sparano of Montefiore Medical Center in New York, "any woman with early-stage breast cancer 75 or younger should have the test and discuss the results" with her doctor.

Breast cancer is the leading cause of cancer death in women worldwide, causing some 1.7 million new cases annually and over half a million deaths.

The study's primary funding came from the US National Institutes of Health (NIH).

The second study tested a form of immunotherapy against chemo, in the most common lung cancer worldwide, known as non-small-cell lung cancer.

More than 1,200 people enrolled in the study, the largest clinical trial to date of pembrolizumab as a stand-alone therapy for lung cancer. The drug was approved in 2014 for melanoma and in 2015 for lung cancer.

"These are responses that are unlike anything we have seen in the past for non-small-cell lung cancer," said lead author Gilberto Lopes, a medical oncologist at the University of Miami Health Center.

Still, he acknowledged that most patients with this form of advanced cancer will die within months, and "we need to do a lot more work."

Lung cancer is the leading cause of cancer death worldwide, taking 1.7 million lives per year.

John Heymach, a professor at the University of Texas MD Anderson Cancer Center who was not involved in the Merck-funded study, described it as a "true milestone" and "a real important advance for patients."

"We are now leaving an era where the only choice for non-small-cell lung cancer patients was to start with chemotherapy," he told reporters at the ASCO conference.

"Now, the vast majority of patients can potentially receive benefits from immunotherapy instead," he added.

"Immunotherapy is here to stay for the vast majority of non-small-cell lung cancer patients as a first-line treatment."

General » Be a reporter: Write and send your article » Subscribe for news alert
Tags: health, US, women, cancer, biotechnology