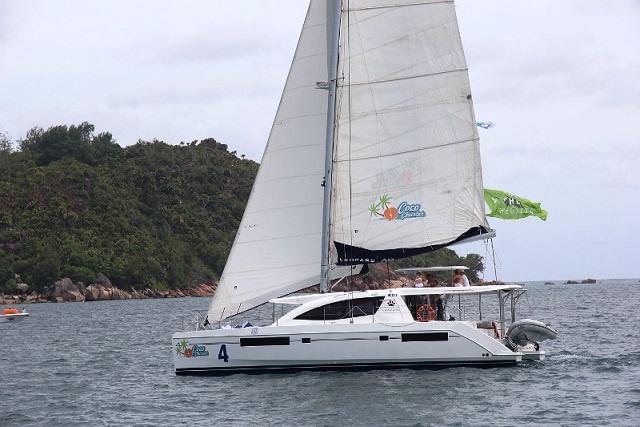 The skipper of the team, French Franck-Yves Escoffier, told the press at the awards ceremony on Saturday evening that the race was close and the experience was great.

“Despite it being a very tight race between sailors we managed to make a difference through the points accumulated throughout. We had a nice experience visiting several islands at the same time and that is a privilege in itself,” said Escoffier.

He added that: “I was equipped with a good crew and a good boat for the competition and the weather was perfect. We had the wind needed to sail to the end.”

Mettraux said that for a female crew, the team is happy to have finished in the second position.

“I have enjoyed every second of the race and the islands. My favourite has been the Fregate island which is untouched,” said Mettraux. She added that she will “come back next year, but this time to win.”

Nine boats with around 100 skippers and crew members took part in the 4th edition of the Seychelles Regatta held after a six-year break from the first three editions in 2009, 2010, and 2011.

The competition started at Eden Island, a reclaimed land on the eastern coast of Mahe, the main island. Each day sailors were able to visit different islands and for this edition, a few more islands were added to the itinerary.

The Regatta offered a balance of rigorous sailing and tourism by encouraging a discovery of the 115-island archipelago in the western Indian Ocean.

Regis Elhaouel, general manager of ‘Publi Voile’ -- the main organiser of the event, thanked participants and sponsors for making the event a success.

He said that he had a memorable experience and hopes that next year will be much better with more islands added on the itinerary.

The chief executive of the Seychelles Tourism Board, Sherin Francis, told the participants that she hopes that their experience in the Seychelles’ open ocean, “will not only provide you with lifelong memories but also serves to boost Seychelles reputation as a dream sailing and cruising destination.”

Francis hopes that the sailing competition remains on Seychelles’ calendar of events, with even more participants in future.