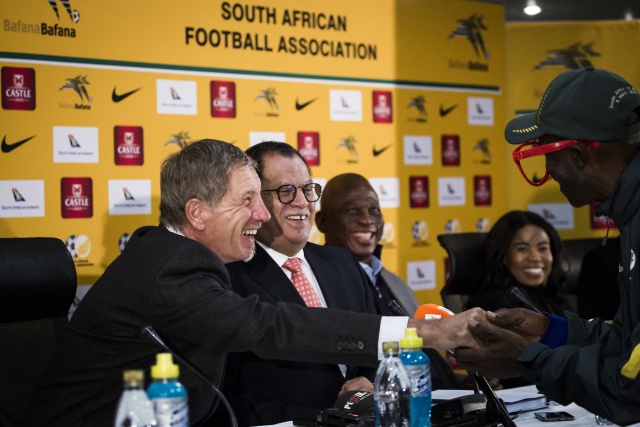 Newly appointed head coach of South Africa's national football team "Bafana Bafana", Stuart Baxter (L), shakes hands with a supporter as president of the South African Football Association (SAFA) Danny Jordaan (2nd L) reacts during a press briefing at the SAFA House in Johannesburg on May 15, 2017. England-born Stuart Baxter was officially unveiled as South Africa coach on May 15 on a five-year contract and said winning was all that mattered. (GULSHAN KHAN / AFP)

Both southern Africa championship quarter-finals in northern city Polokwane were decided by penalty shootouts, as was one of the two last-eight matches the previous day.

Madagascar mocked being 42 places below South Africa in the FIFA world rankings this month by drawing 0-0 after 90 minutes and winning 4-3 on penalties.

Record five-time champions Zimbabwe were indebted to goalkeeper George Chigova, who saved three straight penalties in a shootout won 3-1 by his team after a 1-1 draw in regulation time.

In the semi-finals, Madagascar face Zambia and Lesotho meet Zimbabwe this Wednesday with the odds favouring a second successive Zambia-Zimbabwe title decider.

Although fielding an experimental team, South Africa had sufficient chances to have sewn up victory over Madagascar by half-time with Lebohang Maboe and Luther Singh the chief culprits.

A miserable match for Portugal-based Singh was completed when his weak, casual kick in the shootout was saved by Jean Dieu Randrianasolo.

Sandratriniaina Njakanirina scored off the following kick, which entered the net via the outstretched foot of goalkeeper Reyaad Pieterse, to give the Indian Ocean island nation victory.

The humiliating exit by South Africa is sure to reopen a debate as to whether England-born Stuart Baxter is the right coach to be in charge of Bafana Bafana (The Boys).

A controversial choice last year after a disappointing first spell in charge a decade ago, Baxter has fared even worse during his second tenure.

Under him, South Africa lost four of five 2018 World Cup qualifiers, with the lone bright spot a 2-0 away win over Nigeria in a 2019 Africa Cup of Nations eliminator.

It was surprising that Zimbabwe needed penalties to win the second match of a double-header as they dominated Botswana for much of the liveliest of the four quarter-finals.

Evans Rusike put the reigning champions ahead on 39 minutes by outpacing two defenders and slamming the ball into the net.

Botswana levelled on the hour with a glancing header from Onkabetse Makgantai sneaking into the far corner for his fourth goal of the tournament.

After each team scored off their first shootout kick, South Africa-based Chigova saved three in a row to ensure victory for Zimbabwe.

But despite the heroics of the giant goalkeeper, Makgantai won the man-of-the-match award.

Africa » Be a reporter: Write and send your article » Subscribe for news alert
Tags: football, COSAFA