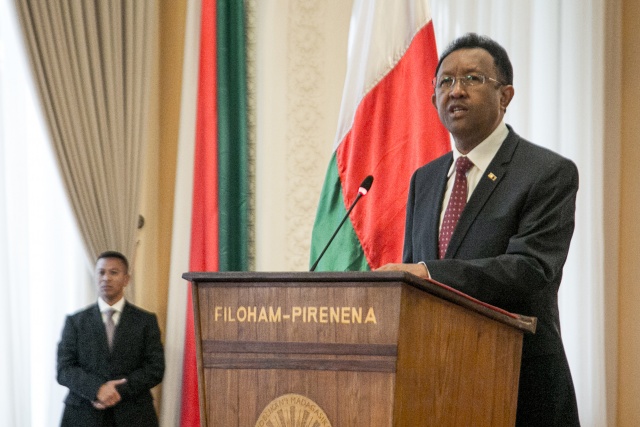 Mdagascar's President Hery Rajaonarimampianina delivers a speech during a press conference, after accepting the resignation of outgoing Madagascar's Prime Minister Olivier Mahafaly (unseen) on June 4, 2018, in Antananarivo. Madagascar's president named a senior UN official on June 4, 2018 to head a government of national unity in a bid to end a crisis sparked by electoral reforms. The Constitutional Court had ordered President Rajaonarimampianina to form a government of national unity with a "consensus prime minister" to avert a full-blown crisis. For that to happen, the current government was required to resign and the president was ordered to name a new prime minister. (RIJASOLO / AFP)

(AFP) - Madagascar's president named a senior UN official on Monday to head a government of national unity in a bid to end a crisis sparked by electoral reforms.

The Indian Ocean nation has been rocked by protests initially called against new laws the opposition said were aimed at barring their candidates from taking part in elections scheduled for later this year. But the demonstrations have turned into demands for the president to resign.

"I have named Christian Ntsay, an experienced man with the skills necessary for reconciliation, as prime minister," said President Hery Rajaonarimampianina at a press conference, announcing the appointment of a career civil servant who currently works at the UN's International Labour Organisation (ILO).

The Constitutional Court had ordered Rajaonarimampianina to form a government of national unity with a "consensus prime minister" to avert a full-blown crisis.

"The year 2018 is a year to reinforce the principle of the democratic transfer of power through the ballot box," added Rajaonarimampianina.

"I call on political leaders to respect this political settlement."

Ntsay, 57, is not a member of any political party. He has a reputation as an international expert in labour management and leadership, previously serving as Madagascar's tourism minister between 2002 and 2003.

"For now I don't think this nomination is constitutional... it's a PM who is on the side of the government, I don't think he's a consensus prime minister," said opposition Mapar party lawmaker Christine Razanamahasoa.

"This isn't 'our' prime minister -- we never recommended anyone to the president. But we do accept it. He should now start thinking about forming a government," said Rakotovao, who is also the senate leader.

Former prime minister Olivier Mahafaly Solonandrasana announced his resignation to the media earlier on Monday to avoid becoming "an obstacle to the life of the nation".

"I will leave this magnificent palace, (but) I tell you this is not 'goodbye'," he added without giving details of his plans.

"I thank them for the work they have done in the past two years," said the president following the former prime minister's exit.

Madagascar has a history of chronic instability since the final years of former Marxist military leader Didier Ratsiraka's rule, who was voted out in 2001.

Since April 21, hundreds of opposition supporters have occupied the capital Antananarivo's May 13 square, initially to protest the president's proposed electoral reform package.

But after those proposals were overturned by the courts, the protests became a full-blown movement to oust Rajaonarimampianina. Violence has claimed two lives and left more than a dozen injured.

The Constitutional Court ruled that the composition of the new unity government should proportionately reflect the outcome of the last legislative elections in 2013.

However, the ruling triggered fierce debate between the government and the opposition over its interpretation.

Both sides say they hold the majority in parliament, where many legislators have switched allegiances since 2013.

There has been no announcement of who will join Ntsay's government as ministers.

"The people calling for change don't want the return of the old gaffe-prone ministers, so we are waiting to see the composition of the new government," said opposition lawmaker Jean Brunelle Razafitsiandraofa.

Over the weekend, Rajaonarimampianina rejected three opposition nominations for the job of "unity" prime minister. All three are members of the Mapar party led by former president Andry Rajoelina.

"We have compromised," added Rakotovao.