Jordan king calls for review of bill that sparked protests 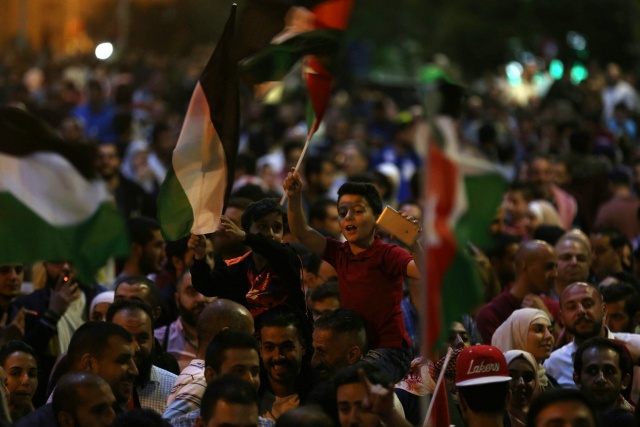 Children wave flags during a protest in Amman, Jordan, near the prime minister's office on June 4, 2018. Jordanian Prime Minister Hani Mulki resigned on June 4 after a wave of anti-austerity protests by citizens suffering from high unemployment and repeated price hikes. (Khalil MAZRAAWI / AFP)

(AFP) - Jordan's King Abdullah II called for a review of a controversial draft tax law Tuesday as anti-austerity protesters staged another night of demonstrations in Amman and trade unions vowed to hold a general strike.

For nearly a week, the capital and other cities have been hit by angry rallies against reforms backed by the International Monetary Fund that have brought repeated price hikes.

Prime Minister Hani Mulki stepped down on Monday in an effort to quell the unrest but his departure -- and King Abdullah's call to review the law -- appear to have done little to reduce public anger.

On Tuesday evening, protesters held another mass rally in Amman after breaking their Ramadan fast, jostling with police and waving Jordanian flags. Trade unions said the law review was a "positive" step but nonetheless called for a general strike on Wednesday.

At a rally Monday night, many demonstrators said they wanted more than Mulki's departure.

"We are demanding a change to the government's economic programme, not just a change in prime minister," said 23-year-old university student Ahmad Abu Ghazzal.

"We're sick of seeing changes in the cabinet -- it's not good enough and it doesn't have any results."

In a letter charging new premier Omar al-Razzaz with forming a government, King Abdullah II said it "must carry out a comprehensive review of the tax system" to avoid "unjust taxes that do not achieve justice and balance between the incomes of the poor and the rich".

Late Monday, the king had warned Jordan was "at a crossroads", blaming the economic woes on regional instability, the burden of hosting hundreds of thousands of Syrian refugees and a lack of international support.

Protesters on Monday night chanted "we want rights and duties, not tips and handouts!" and "down with the IMF!" as they gathered under a heavy police presence.

Last month, the government proposed a new income tax law, yet to be approved by parliament, aimed at raising taxes on employees by at least five percent and on companies by between 20 and 40 percent.

It was the latest in a series of austerity measures since Amman secured a $723-million loan from the IMF in 2016.

Since January, resource-poor Jordan, which suffers from high unemployment and poverty, has seen repeated price rises including for staples such as bread, as well as extra taxes on basic goods.

Fuel prices have risen five times since the start of the year, while electricity bills have surged by 55 percent since February.

The measures have sparked some of the biggest economic protests in five years.

After a two-hour meeting Tuesday afternoon, head of the trade unions' council Ali al-Abous called on Jordan's new premier to "open a constructive dialogue" with the unions and civil society groups "to get out of this impasse that the draft income tax law has put us in".

The head of Jordan's Bar Association, Mazen Arshidat, said the unions "were determined to withdraw" the tax reform bill.

Jordan, a key US ally, has largely avoided the unrest witnessed by other countries in the region since the Arab Spring revolts broke out in 2011, although protests did flare late that year after the government cut fuel subsidies.

They have rocked several other cities, including Irbid and Jarash in the north, Zarqa in the east, and the southern city of Maan, which saw deadly riots in the 1980s over rising food prices.

"When the protests began, they weren't just directed against Mulki as a person, they were against the income tax draft law and the price hikes," said Bushra Abu Jabbara, a 34-year-old pharmacist.

"We want the government to respond to our demands and withdraw the bill, which hasn't happened yet."

A majority of deputies -- 78 out of 130 -- have said they will vote against the draft legislation.

The bill is one of a tranche of measures aimed at slashing Jordan's public debt from over 90 percent of gross domestic product to 77 percent by 2021.

King Abdullah said gas supply cuts due to attacks on an Egyptian pipeline to Israel and Jordan had cost the kingdom some $5.6 billion (4.8 billion euros).

He added that the closure of the borders with the kingdom's main export markets, war-torn Syria and Iraq, and the cost of securing those frontiers had added to Jordan's economic woes.