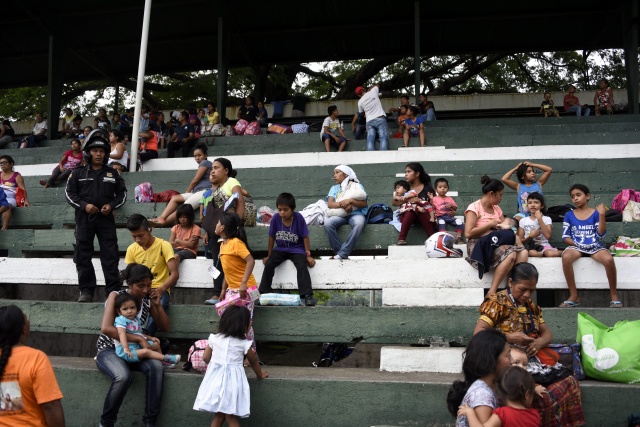 People gather at the Municipal stadium in Escuintla, about 35 km southwest of Guatemala City, on June 5, 2018 after the Fuego Volcano showed new activity. Rescue workers search more bodies from under the dust and rubble left by an explosive eruption of Guatemala's Fuego volcano, bringing the death toll to at least 73. (Johan ORDONEZ / AFP)

(AFP) - Nearly 200 people are missing and at least 75 have been killed since Guatemala's Fuego volcano began erupting over the weekend, officials said Tuesday.

In the city of Escuintla, near the summit, panicked locals rushed to their cars to escape, causing chaotic traffic.

An AFP photographer saw a large plume of ash rise into the sky, prompting an evacuation of everyone authorities could find before the police, the military and rescuers were ordered to stand down.

The search for bodies in mountain villages destroyed by the eruption was progressing slowly, officials said earlier, given the nature of the terrain and the way the volcano released large amounts of boiling mud, rock and ash down the mountain.

"We will continue until we find the last victim, though we do not know how many there are. We will probe the area as many times as necessary," Cabanas told AFP.

However, the prospects of finding any more survivors was poor, he said.

"If you are trapped in a pyroclastic flow, it's hard to come out of it alive," he said, adding that people who may have been caught in the flow may never be found.

Among the latest of the 75 fatalities reported by the National Institute of Forensic Sciences was a 42-year-old woman who died in hospital having lost both legs and an arm in the eruption.

The previous toll was given as 73. Some 46 people were injured, around half of whom are in serious condition, officials said.

The 3,763-meter (12,346-foot) volcano erupted early Sunday, spewing out towering plumes of ash and a hail of fiery rock fragments with scalding mud.

Authorities said more than 1.7 million people had been affected by the disaster, including more than 3,000 ordered evacuated, many living in shelters in Escuintla, Sacatepequez and Chimaltenango since Sunday's eruption.

The speed of the eruption took locals by surprise, and could be explained by it producing pyroclastic flows, sudden emissions of gas and rock fragments, rather than lava, said volcanologist David Rothery of Britain's Open University.

President Jimmy Morales, who has declared three days of national mourning, has visited the disaster zone.

UN Secretary-General Antonio Guterres said he was deeply saddened by the "tragic loss of life and the significant damage caused by the eruption," and said the UN was ready to assist national rescue and relief efforts.

General » Be a reporter: Write and send your article » Subscribe for news alert
Tags: Guatemala, volcano