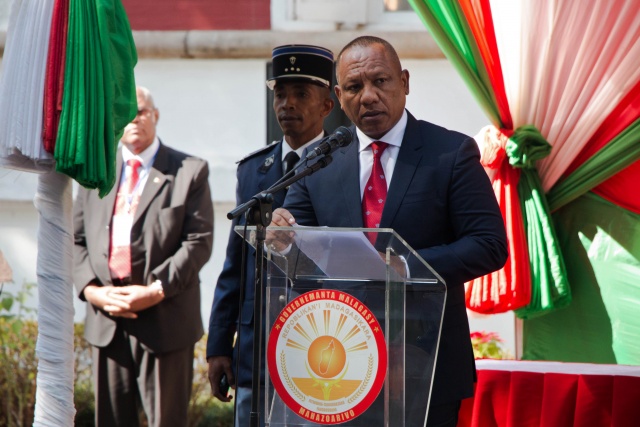 (AFP) - Madagascar's new prime minister, Christian Ntsay, took office on Wednesday, vowing to push ahead with an "inclusive presidential election" aimed at hauling the country out of a deep crisis.

"My priority is to prepare an inclusive presidential election that is accepted by all," Ntsay said after taking the helm from Olivier Mahafaly Solonandrasana.

Ntsay, a technocrat, was named by President Hery Rajaonarimampianina on Monday under a process ordered by the Constitutional Court to end a long-running political crisis.

Rajaonarimampianina was instructed to form a government of national unity with a "consensus prime minister" ahead of a presidential election later this year.

The Indian Ocean nation has been rocked by protests initially called against new electoral laws the opposition said were aimed at barring their candidates from taking part in elections scheduled for later this year.

But the demonstrations have snowballed into demands for the president to step down. Two people have been killed in clashes.

Ntsay on Tuesday said his other main priorities, in descending order, were "social peace," security and the fight against corruption, and paid tribute "to all those who have lost their lives in this crisis."

In another sign of reconciliation, he also thanked one of the opposition leaders, Andry Rajoelina, who heads the Mapar party, for proposing him as a candidate for prime minister.

The Constitutional Court ruled that the composition of the new unity government should proportionately reflect the outcome of the last legislative elections in 2013.

However, that ruling has triggered fierce debate between the government and the opposition.

Both sides say they hold the majority in parliament, where many legislators have switched allegiances since 2013.

Ntsay is a career civil servant who had been working at the UN's International Labour Organisation (ILO) before his appointment.

Elections were already expected between November and December, but the Consitutional Court ordered that they should be held in the "dry season" -- between May and September.

Rajaonarimampianina has not said whether he will seek a new term in office. Two of his predecessors, Rajoelina and Marc Ravalomanana have indicated that they will run.