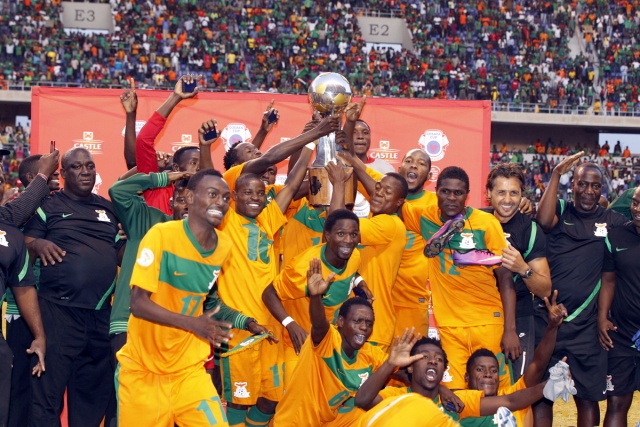 (File) Zambia's players celebrate with the trophy after beating Zimbabwe during their COSAFA Castle tournament final football match at Levy Mwanawasa Stadium in Ndola, on July 20, 2013. The two countries will once again face each other in the Cosafa Cup final this weekend. (AFP PHOTO/ STR / AFP)

(AFP) - Captain and goalkeeper George Chigova starred for defending champions Zimbabwe as they edged Lesotho on penalties Wednesday to reach the Cosafa Cup final against Zambia.

Chigova was beaten a second time, but the successful fourth Lesotho penalty was disallowed because the run-up of Jane Thaba-Ntso was judged illegal.

Surprisingly, his remarkable penalty-saving feats did not earn him the man-of-the-match award in either match.

Zambia defeated Madagascar 1-0 in the first half of a semi-finals double-header at Peter Mokaba Stadium, one of the venues for the 2010 World Cup in South Africa.

Lazarous Kambole scored the only goal six minutes before half-time to set up a repeat of the 2017 final, which Zimbabwe won 3-1 in South Africa.

Malagasy hopes of snatching a late equaliser suffered a setback when substitute Andriamanjato Tokifandresena was red-carded after being cautioned twice within three minutes.

Zambia's first president Kaunda to be buried on July 7