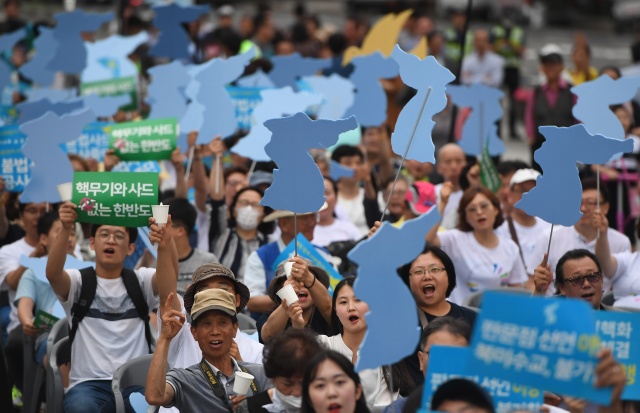 South Korean peace group members hold the Korean Peninsula-shaped cardboards during a rally to wish for peace and success at the upcoming summit between US President Donald Trump and North Korea's leader Kim Jong Un, near the US embassy in Seoul on June 9, 2018. US President Donald Trump and the North's leader Kim Jong Un will meet next week in Singapore for their unprecedented summit. (Jung Yeon-je / AFP)

(AFP) - North Korean leader Kim Jong Un and Donald Trump arrived in Singapore Sunday for an unprecedented summit, with Pyongyang's nuclear arsenal at the top of the agenda and the US president calling it a "one-time shot" at peace.

Bringing the Korean War to a formal end 65 years after hostilities ceased will also be on the table at the first-ever meeting between a North Korean leader and a sitting president of its "imperialist enemy".

It is an extraordinary turnaround from the tensions of last year, when Kim accelerated his weapons programmes -- earning the North more sets of UN Security Council sanctions -- and the two men traded personal insults and threats of war.

But critics charge that the meeting risks being largely a triumph of style over substance.

Kim arrived in Singapore on board an Air China 747 that, according to flight tracking website Flightradar24, took off from Pyongyang in the morning ostensibly bound for Beijing then changed its flight number in midair and headed south.

He was driven into the city centre in a stretch Mercedes-Benz limousine accompanied by a convoy of more than 20 vehicles, and later met Singaporean Prime Minister Lee Hsien Loong, thanking him for hosting the event.

"If the summit becomes a success, the Singaporean efforts will go down in history," Kim said.

Trump landed in the evening after a long flight from Canada and the G7 meeting there, telling Singaporean officials who welcomed him that he was feeling "very good" about the summit.

Authorities imposed tight security around the summit venue and the luxury hotels where the leaders were to stay -- including installing extra pot plants outside Kim's accommodation to obstruct reporters' views.

In a report describing Kim's departure from Pyongyang, KCNA said a "changed era" had come about, adding that views on achieving denuclearisation and a "permanent and durable peace-keeping mechanism on the Korean Peninsula" would be exchanged at the summit.

But former US deputy secretary of state Richard Armitage said he expects little progress on the key issue of defining the parameters of denuclearisation .

"The success will be in the shutter clicks of the cameras," he said. "They both get what they want."

Trump insisted last week that the summit would "not be just a photo op", saying it would help forge a "good relationship" that would lead to a "process" towards the "ultimate making of a deal".

But as he embarked for Singapore he changed his tune, calling it a "one-time shot" and adding he will know "within the first minute" whether an agreement will be possible.

"If I think it won't happen, I'm not going to waste my time," he said.

On Sunday Pope Francis struck an optimistic note, saying he hoped the talks might "ensure a future of peace for the Korean peninsula and the whole world."

But the value of the event -- long sought by the North, and which Trump apparently impulsively agreed to in March, reportedly without consulting his advisers -- has been called into question by many seasoned experts.

"People call it a historic summit but... it is important to understand that this summit was available to any US president who wanted to do it and the point is no US president wanted to do this, and for good reasons," said Christopher Hill, a former lead US nuclear negotiator with North Korea.

The two countries have been at loggerheads for decades.

The North invaded the South in 1950 and the ensuing war pitted US-led UN troops backing Seoul against Pyongyang's forces which were aided by China. The conflict ended in an armistice which sealed the division of the peninsula.

Occasional provocations by the North have continued while Pyongyang has made increasing advances in its nuclear arsenal, which it says it needs to defend against the risk of a US invasion.

Last year it carried out by far its most powerful nuclear test to date and launched missiles capable of reaching the US mainland, while Trump threatened the North with "fire and fury" and Kim dubbed him a "mentally deranged US dotard".

But the South's Winter Olympics in February were the catalyst for a flurry of diplomatic moves as South Korea's dovish leader Moon Jae-in sought to bring the two sides together.

Kim has met twice with both Moon and Xi Jinping, the president of China, long the North's most important ally.

Pyongyang has taken some steps to show sincerity, returning three US detainees and blowing up the entrances to its nuclear test site.

US Secretary of State Mike Pompeo said last week that progress was being made in bringing the two sides together in their understanding of denuclearisation.

But Trump baffled observers when he said he did not think he had to prepare "very much" for the summit.

"It's about attitude," Trump said. "So this isn't a question of preparation."

General » Be a reporter: Write and send your article » Subscribe for news alert
Tags: NKorea, US, summit, nuclear