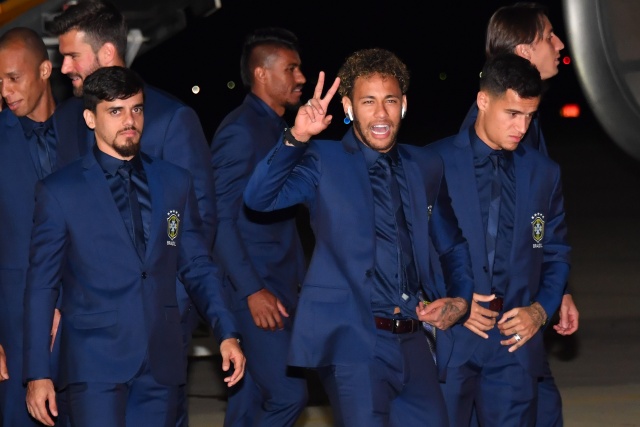 (L-R) Brazil's Fagner, Neymar and Philippe Coutinho and the rest of the national team descend from the plan upon landing at Sochi airport, in Russia on June 11, 2018, ahead of the FIFA World Cup. (Nelson ALMEIDA / AFP)

(AFP) - Brazil arrived in Russia on Monday hungry to make amends for their World Cup humiliation in 2014 with Neymar apparently fighting fit, as Lionel Messi cast doubt over his international future.

The Brazilians landed in the early hours in Sochi, the Black Sea resort where they will be based, buoyant after beating Austria 3-0 in their final warm-up match.

Most of the favourites are now in Russia ahead of Thursday's curtainraiser between the hosts and Saudi Arabia but holders Germany are due to arrive on Tuesday.

The atmosphere is low-key ahead of the opening match at Moscow's imposing 80,000-capacity Luzhniki stadium.

Russia was a disputed choice when it was handed the World Cup in a closely watched 2010 vote that has since been tainted by bribery charges and the tournament takes place against a background of international tensions.

Russia and the West have engaged in a major wave of tit-for-tat diplomatic expulsions since London accused Moscow of being behind the poisoning of Sergei Skripal in Britain in March.

Brazil's Neymar, who broke a bone in his foot in February, marked his first start in more than three months by scoring in Sunday's easy victory in Vienna while Gabriel Jesus and Philippe Coutinho also netted.

It was Neymar's 55th goal in a Brazil shirt, allowing him to draw level with Romario on his country's list of all-time leading scorers -- only Pele and Ronaldo have more goals for their country.

"I don't know Neymar's limits," Brazil coach Tite said. "His technical and creative capacity is impressive. When we get him in the last third of the field he is lethal."

Brazil, who crashed out of the last World Cup on home soil in a humiliating 7-1 semi-final defeat to Germany, start their campaign against Switzerland in Rostov-on-Don on Sunday.

Argentina captain Messi, one of the biggest stars in Russia, said his international future will be determined by his country's performance at the World Cup.

"It will depend on how far we go, how we're going to finish" at the finals, Messi said in an interview with Spanish daily Sport.

"We've just lost three finals in a row, which has led to us going through some difficult moments with the press," added the Barcelona forward.

Argentina lost the 2014 World Cup final 1-0 to Germany after extra time, before suffering successive defeats by Chile on penalties at the Copa America in 2015 and 2016.

Messi, who will turn 31 during the World Cup, believes Spain, Brazil, Germany, France and Belgium are the leading contenders for the title.

A big question mark hangs over the participation of Egypt and Liverpool striker Mohamed Salah, who is still receiving treatment for the shoulder injury he suffered in the Champions League final.

Egypt are banking on the availability of Salah as they try to get past the first stage of a World Cup for the first time.

The Egyptians arrived at their base in the Chechen capital Grozny on Sunday, after Salah sat out their final training session in Cairo.

Once they touched down, tracksuited Chechen leader Ramzan Kadyrov was among the first to greet Salah.

Team doctor Mohamed Abou al-Ela admitted the striker, who scored 44 goals for Liverpool this season, was unlikely to play in Egypt's opening Group A match against Uruguay on Friday.

"He still feels pain... this type of injury needs a recovery period of three weeks before going back to the field," he said.

While the favourites limber up, host nation Russia are under intense pressure as they prepare to open the tournament.

Ranked a lowly 70 in the world, Russia have not won for seven consecutive games.

President Vladimir Putin, who has spent billions to put on the biggest sports event in Russia since the 1980 Moscow Olympics, has exhorted the team to raise their level.

"I must acknowledge the fact that, unfortunately, our team have not achieved big results in recent times," Putin said last week.

Before Thursday's kickoff, FIFA will focus on choosing the host of the 2026 World Cup between a joint bid featuring the United States, Canada and Mexico and underdogs Morocco.

FIFA member states will vote on the issue at their congress on Wednesday.