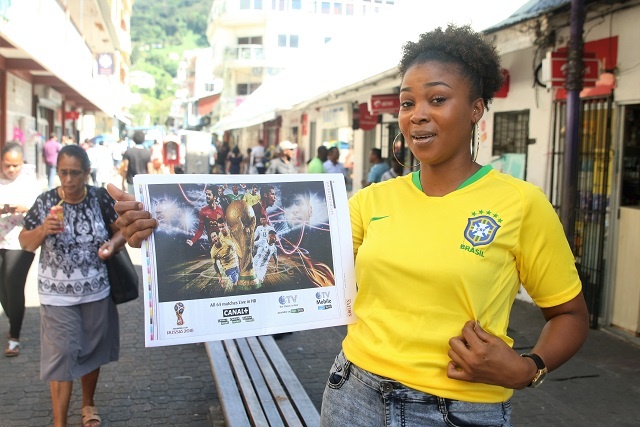 Football fans from Seychelles are gearing up for this week's kick-off of the 2018 World Cup. (Joe Laurence, Seychelles News Agency)

(Seychelles News Agency) - Seeing more football jerseys in the streets this week? That would be thanks to excited football fans from Seychelles who are gearing up for this week's kick-off of the 2018 World Cup.

The World Cup, organised by the International Football Federation (FIFA), is held every four years. This year it will take place in Russia from 14 June to 15 July 2018.

For football fans in Seychelles, an archipelago in the western Indian Ocean, the World Cup turns into a type of holiday celebration, with cars, offices and houses decorated with flags of their favourite team.

“I am a great fan of football and I have loved Brazil since I was a kid. I am looking forward to their performance in this World Cup,” says Raynold Nicette.

“I think Germany can keep its title but it will be hard because so many countries have improved during the last four years. I will also give my support to my African countries such as Nigeria,” said Annifa Finesse.

The FIFA World Cup is also an opportunity for businesses to make some extra money through the sales of flags, scarfs and T-shirts of participating countries.

The representative of Boom Box trading, which sells different accessories with printed logos of the English Premier League, says that sales are much better during the FIFA World Cup period.

Francis Francoise told SNA that “at the moment products with logos of Brazil, Germany, Spain and France are selling the most. We have flags, mugs and bottles among others. We have regulars who come and others who are World Cup enthusiast.”

Facebook is also being used as a business platform to sell adult and kids T-shirts, and shorts and caps.

Local sports journalist of the Seychelles Broadcasting Corporation (SBC), George Francois, said that the football world cup also unites people even countries who are in conflict.

The SBC television and cable television providers in the island nation will be broadcasting the official opening of the competition and the matches.

The tournament will involve 32 national teams playing a total of 64 matches in 12 venues. The opening match is on Thursday between host Russia and Saudi Arabia in group A. The final will take place on July 15th at the Luzhniki Stadium in Moscow.